Sweeping legislation to overhaul voting by mail, advance voting and state oversight of Georgia elections passed out of the General Assembly Thursday and was promptly signed by Gov. Brian Kemp after months of intense debate at the state Capitol.

The legislation drew sharp reaction from legislators in both parties as well as federal officials including President Joe Biden.

State Reps. Roger Bruce, D-Atlanta, and Kimberly Alexander, D-Douglasville — both members of Douglas County’s state delegation — said the bills introduced this legislative session were based on lies told by former Republican President Donald Trump after he was defeated by Biden in November’s election.

“This is a straight takeover and power move by Republicans,” said Alexander. “It is a move to take over an election. I did not support it at all. It is troubling. Historically, it is the biggest Jim Crow reform bill ever.”

“I think we are on a slippery slop when it comes to elections,” Bruce said. “Republicans passed this legislation based on lies perpetrated by the former president. It is just not true. Georgia Republicans have flipped on the Secretary of State because he didn’t rig the election. What they are saying is they want certain people in place for elections.”

Telephone conversations revealed Trump asking Secretary of State Brad Raffensperger to “find” some votes to swing the election his way.

“I’m glad it passed,” he said. “It is the first time we have codified into law weekend voting. We made access to voting boxes secure. I don’t believe it is voter suppression. It gives everyone eligible a chance to vote. I support it.”

The 95-page bill contains dozens of proposals pitched by Republicans that would require stricter voter ID rules for mail-in ballots, ban people from handing out food and drink to voters waiting in line outside polling places and halt absentee ballot applications from being accepted within 11 days of an election.

It cleared the state House of Representatives by a 100-75 vote along party lines Thursday before gaining final passage a few hours later in the state Senate, also by a party-line vote. Kemp signed the bill into law about an hour after its passage in the Senate.

The bill, sponsored by state Sen. Max Burns, R-Sylvania, absorbed proposals from several other election-focused measures on its way to passing out of the state legislature, swelling to nearly 100 pages from an original 2-page bill last week in a process that drew concerns over transparency.

Beyond absentee and early voting changes, Burns’ bill would also allow state officials to take over county election boards for poor performance, which Democratic leaders and voting-rights advocates argue could give Republicans a back door to influence local election operations in many counties.

The bill also dropped a prior effort by Republican state lawmakers to shrink early voting on Sundays in Georgia. It instead would require two Saturdays of early voting and give counties the option to hold poll hours on two Sundays.

Among the bill’s most contentious changes to survive final passage is a requirement that registered Georgia voters provide the number on their driver’s license or state ID card to request and cast absentee ballots. If they do not have those ID forms, voters instead would have to send in a copy of their passport, employee ID card, utility bill or bank statement.

“Our goal is to ensure election integrity and to restore or confirm confidence in the election process,” Burns said from the Senate floor shortly before the bill’s passage.

Several groups have already filed lawsuits in an attempt to block the new law from taking effect.

“Georgia Republicans have shown their true colors,” he said in a statement released to the press. “The rushed passage of S.B. 202 is no less than a full-blown assault on Georgians’ right to vote, one aimed at silencing working people of color across the state. Brian Kemp is openly dragging Georgia’s elections back to the Jim Crow era, from making it harder to register to vote to criminalizing those who bring water to voters waiting at the polls.”

“SB 202 is a terrible bill that harks back to the years of Jim Crow, and it is truly unconscionable that in this day and age Georgia State Legislators would attempt to disenfranchise eligible voters,” Scott said in a statement released on Thursday night.

Alexander said she supports a “safe and secure election” for all voters.

She said some tweaking of the current voting laws was expected but called the new law “a power grab” by the GOP.

“They went all the way in revamping it from top to bottom,” Alexander said. “They want to control the Secretary of State’s office. It is a huge power grab on behalf of the Republicans. It is Jim Crow in modern day. We should be trying to make it easier to vote not harder for our citizens.”

Biden condemned the new law, saying in a statement Friday “This is Jim Crow in the 21st Century.”

“Recount after recount and court case after court case upheld the integrity and outcome of a clearly free, fair, and secure democratic process,” Biden said. “Yet instead of celebrating the rights of all Georgians to vote or winning campaigns on the merits of their ideas, Republicans in the state instead rushed through an un-American law to deny people the right to vote. This law, like so many others being pursued by Republicans in statehouses across the country is a blatant attack on the Constitution and good conscience.”

Capt. Ross Brown was escorted by the Douglas County Sheriff’s Office on Wednesday on his way home after eight months in the hospital recovering from COVID-19. He was greeted by deputies, members of the command staff and others.

When the Douglas County Courthouse opened in 1998, Ross Brown was one of the first sheriff’s deputies assigned to the new building.

Brown worked his way up the ranks and became captain of the division.

On Thursday afternoon, Brown was escorted by the SCOPE Division past the courthouse and sheriff’s office on his way home.

Brown had just been released from a Cobb County hospital after an eight-month battle a COVID-19-related illnesses.

He officially retired from the department after 31 years of service.

“He was by the book,” said Chief Deputy Ken Conner, who worked with Brown at the courthouse.

He did not exit his white mini-van as patrol cars escorted him home.

“He has been a valuable asset to this department,” Lt. Col. Tavarreus Pounds said. “It was a sad time when he got sick. We kept him in our prayers. I’m glad he is better now.”

Prior to his courthouse assignment, Brown was on regular patrol and was also a K-9 handler for the department during his 31 years of service.

In January 1998, Ross and 15 other deputies were assigned to the new courthouse.

Conner was a dispatcher when Brown was on patrol. They eventually served together at the courthouse.

“He was very dependable,” Conner said. “He was hardly ever out of work. He was a hard worker.”

Brown served under four different sheriffs during his tenure.

“He had his own type of sense of humor,” Conner joked.

Douglasville native Makaila Cange was named the Peach Belt Conference Player of the Year and was also named to two All-American teams while leading Lander University to the NCAA Div. II Final Four.

With the sophomore helping lead the way, the No. 2-seeded Bearcats reached the NCAA Div. II national semifinals at the Greater Columbus Convention Center in Ohio.

Lander’s season ended Wednesday with a 74-65 loss to Drury to bring its final record to 20-2.

Cange finished the semifinals game with seven points while leading the team with 13 rebounds.

For only the sixth time in 22 games this season, Cange failed to record a double-double for the Bearcats.

Cange was held scoreless until the 2:13 mark when she hit a pair of free throws, ending a 9-0 Drury run early in the contest.

It was an impressive season for Cange, who was named Peach Belt Conference Player of the Year. Just before the start of the national tournament, she was named to the Div. II All-American team.

In addition, Cange was also named a first-team D2CCA All-American.

It was the first time the Bearcats have ever had multiple players earn All-American honors in the same season.

Just before the postseason begun Cange was named the Peach Belt Conference Player of the Year after leading the conference in double-doubles and six other categories.

She also led the conference in made field goals, field-goal percentage, total rebounds, and offensive, defensive, and total rebounds per game.

As a team, Lander was making its seventh consecutive NCAA Tournament appearance, the longest streak in program history 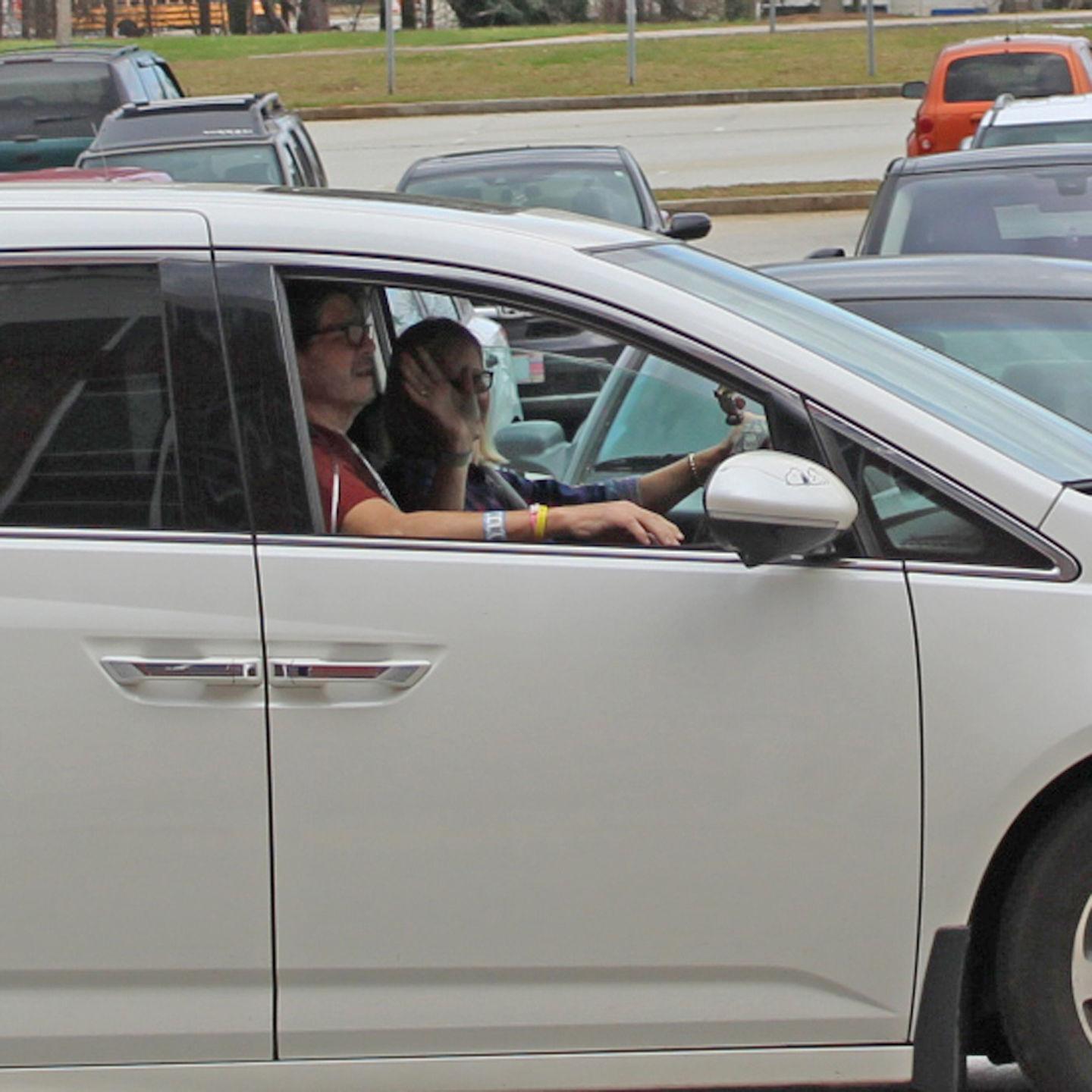 Capt. Ross Brown rides in a white minivan on Wednesday during an escort by the SCOPE Division from a hospital in Cobb County, past the sheriff’s office and courthouse.

A couple of men were arrested for shoplifting after taking turns robbing a Lithia Springs hardware store.

According to arrest warrants, Aaron Coker of Mableton, and Floyd Brewer of Atlanta, are charged with shoplifting tools at the Lithia Springs Ace Hardware store on Lee Road.

He returned to the parking lot and got into a black 2018 Hyundai where Coker was the driver, the arrest warrant stated.

Coker, 34, then went into the store and allegedly stole the same set of tools, according to the arrest warrant.

He returned to the car and drove off, the warrant stated.

On March 20 at 5:35 p.m., the men returned to the same store where Coker allegedly took a 159-piece Craftsman tool set and a 63-piece toolbox, according to the arrest warrant.

The tools are valued at $299 combined.

The warrant stated that Coker ran out of the store and entered a vehicle driven by Brewer.

Brewer was released on Friday and Coker remained in jail, according to court records.