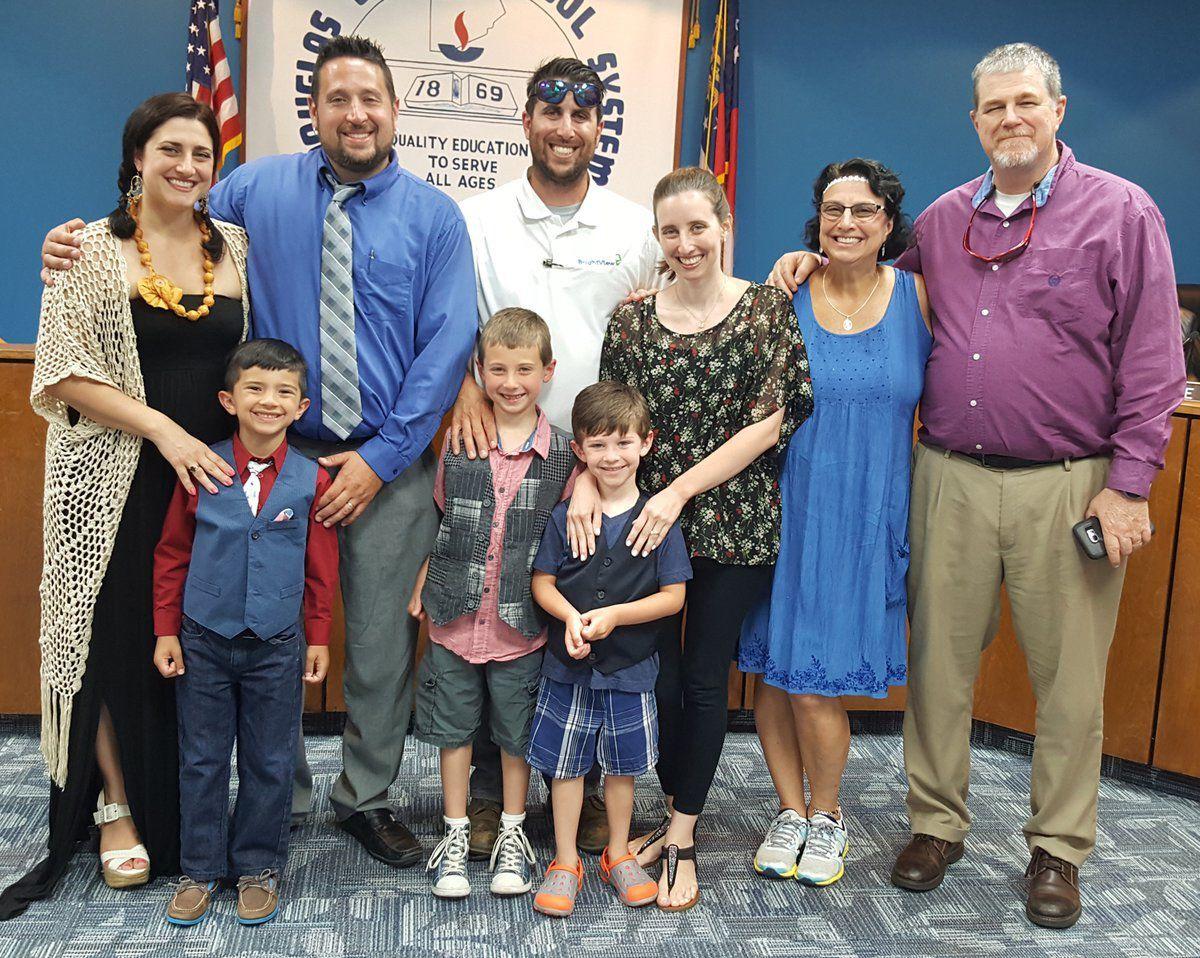 Jack Adams, 6, a kindergartner at Mt. Carmel Elementary, was joined by his family at the Douglas County Board of Education where he was recently honored for having received top honors in a Leadership Video contest. 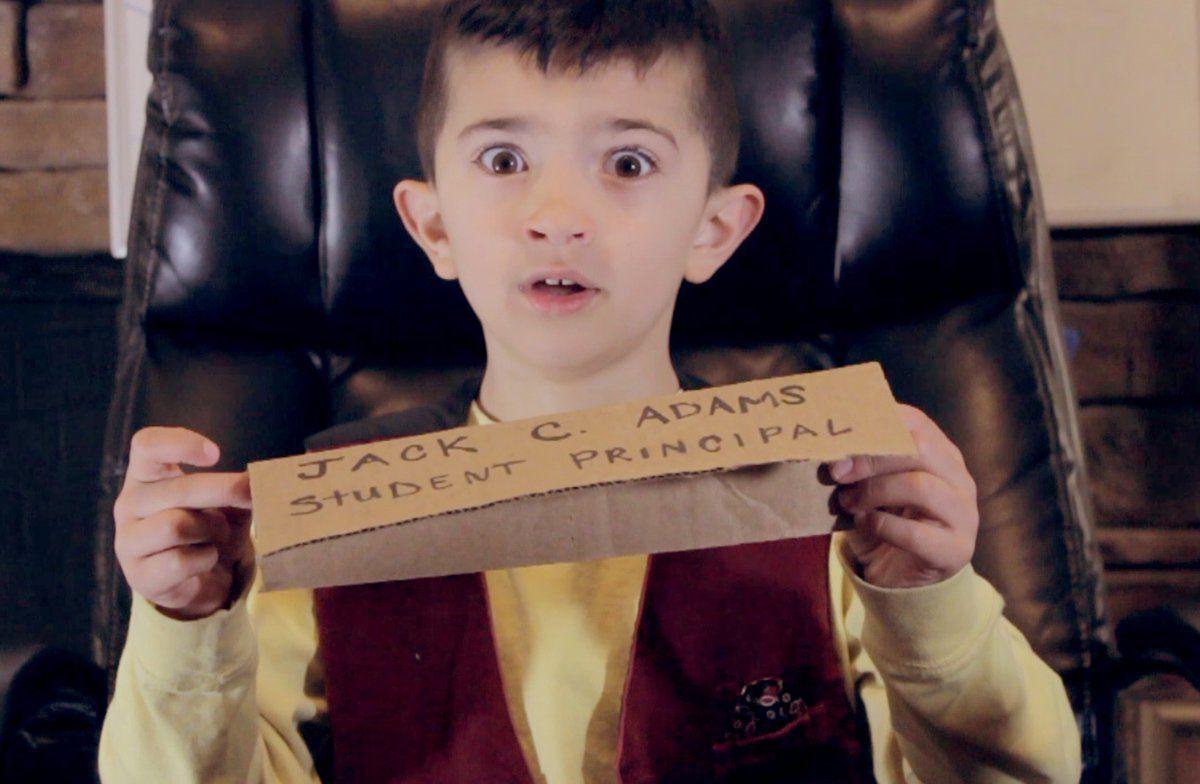 Jack Adams, 6, a kindergartner at Mt. Carmel Elementary, was joined by his family at the Douglas County Board of Education where he was recently honored for having received top honors in a Leadership Video contest.

When student Jack Adams began kindergarten in the fall of 2017, his family expected a typical year of reading sight words and counting to 100. They never imagined, however, that they would be ending the school year sitting at the Douglas County Board of Education watching their 6-year-old son be honored for having received top honors in a Leadership Video contest. It was not the typical ending for a kindergarten school year yet was one of pride and joy based on the applause and smiles of the family in attendance.

It all began just after the new year when Jack was approached by his elementary school principal, Tracey Seymour, and recommended for the 2018 Franklin Covey Leader In Me Video Contest. The competition is open to students from all around the globe and is a contest where applicants are asked to create a two-minute video speech explaining what leadership is, citing examples, and inspiring others to rise up and become leaders themselves. The judging of the competition was to result in eight, grand-prize finalist winners each receiving a $500 Leadership Grant.

"When Jack first told us about the contest, his mother and I were beyond excited at the idea of assisting Jack in the creation of something that would inspire other people," said Daniel Adams, Jack's dad, who is an author of novels that he calls Inspirational Thrillers. "Inspiration plays a huge part in our lives and we knew that win or lose, the idea of touching one life was more valuable than any amount of grant money."

After many conversations as a family, Jack and his parents rearranged his dad's home office into the set by which they would create Jack's video entry which they eventually titled, "Jack C. Adams, Student Principal". In the comedic, two-minute video speech, Jack explains that a Student Principal is someone who learns, as well as leads in everyday life. He makes mention of two inspirations in his life -- Christine Bowen, his Nana -- along with Bosco, the family dog, both of which have inspired him for different reasons. When the video was complete, the family uploaded the submission through the contest website and hoped for the best. After a few months, the best was exactly what they received.

"I remember the night when the grand-prize winners were announced," said Heather Adams, Jack's mom. "When my husband and I saw Jack's video posted as one of the winners, we were so proud of Jack that we wanted to wake him up from his sleep and share the good news with him."

According to the Leader In Me website, "Nearly 500 speeches were submitted by students throughout the world, including the U.S., Canada, Guatemala, Brazil, Malaysia, Thailand, Russia, United Arab Emirates, and the U.K."

Daniel Adams went on to say, "We were honored and blessed to know that the hard work and countless hours Jack poured into the project was selected for high honors amongst so many submissions."

The high honors didn't end there for the young Student Principal. Upon hearing of Jack's grand-prize award, Principal Tracey Seymour of Mount Carmel Elementary School forwarded the word to Douglas County Superintendent Trent North. On Monday, June 18, 2018 the Kindergarten graduate stood before the Board of Education and was honored for his selfless endeavors to create a video that would both entertain as well as inspire. In attendance was Jack's family, Principal Tracey Seymour, along with other teachers from Mount Carmel Elementary who showed up in support of the award-winning accomplishment.

As it turns out, creating videos that entertain and inspire is not a new concept for Jack. In late 2017, Jack and his parents launched a YouTube channel called Jumping Jack Productions where they post short films that the family creates in their spare time, hoping that kids will enjoy the films as well as be inspired by their message.

"'Kids teaching kids' is the catchphrase we like to use," said Daniel as he spoke about the YouTube startup. "We allow Jack and his cousins (Joey Guida and Gabriel Adams) to do the majority of the acting with the hope that their wonderful, innocent hearts will help to convey the message of each production. In the case of our first short film, Keep Reading, we hope that kids will discover, and hold onto, the joys of reading a good book."

With the 2018 Leader In Me Video Contest behind them, Jack plans on taking the $500 Leadership Grant and purchasing copies of the children's books that his Nana writes and donating them to the elementary schools in Douglas County. Any additional money left over, he will set aside for his future, college tuition. In the meantime, Jack C. Adams plans to continue living his life the way he ended his video speech, "By leading people to learn truth, to do what is right, and blazing the trail of excellence."

MORE ON THE WEB

LEADER IN ME 2018 VIDEO CONTEST