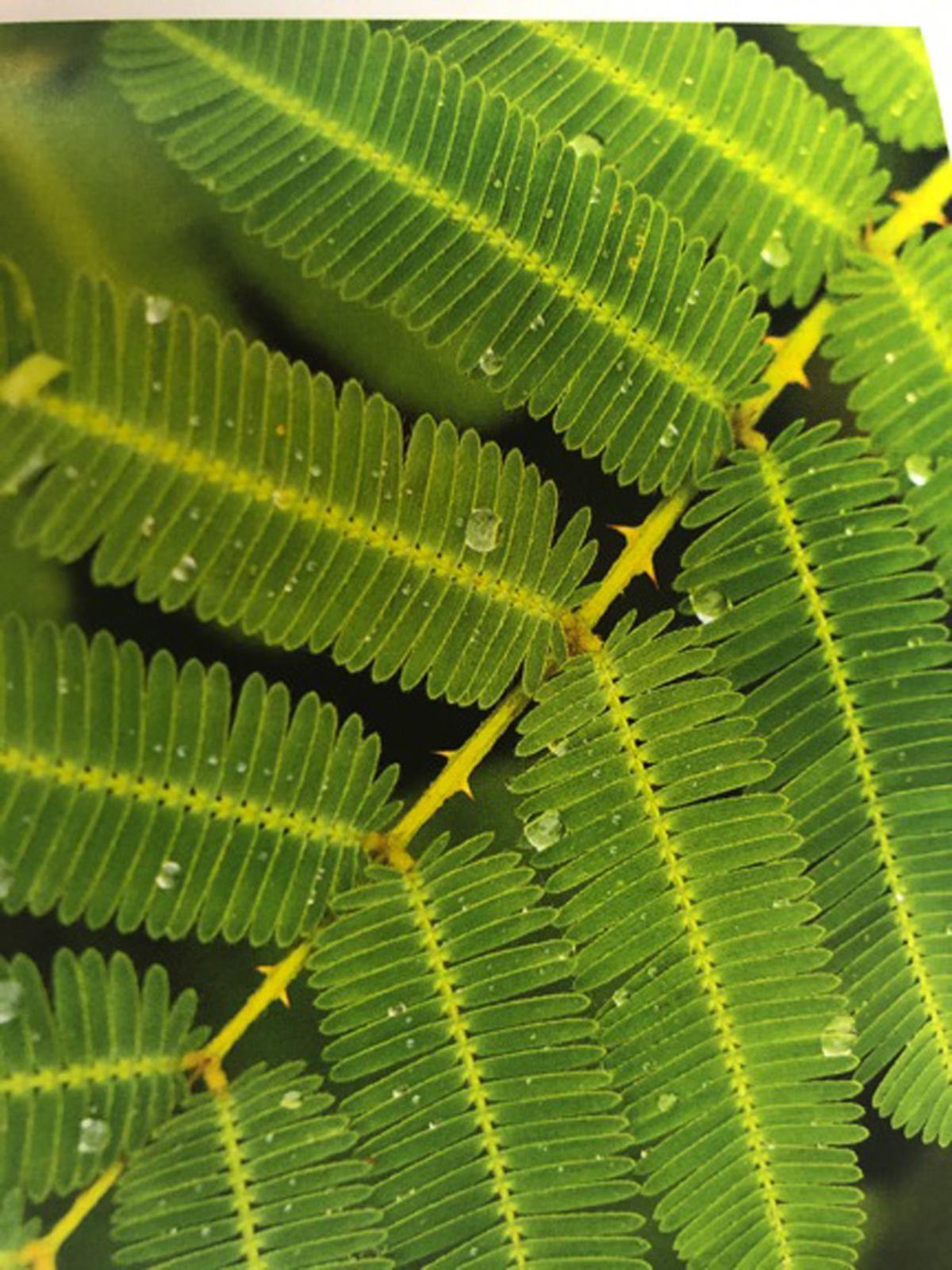 Pictured is a leaf of Mimosa pudica. 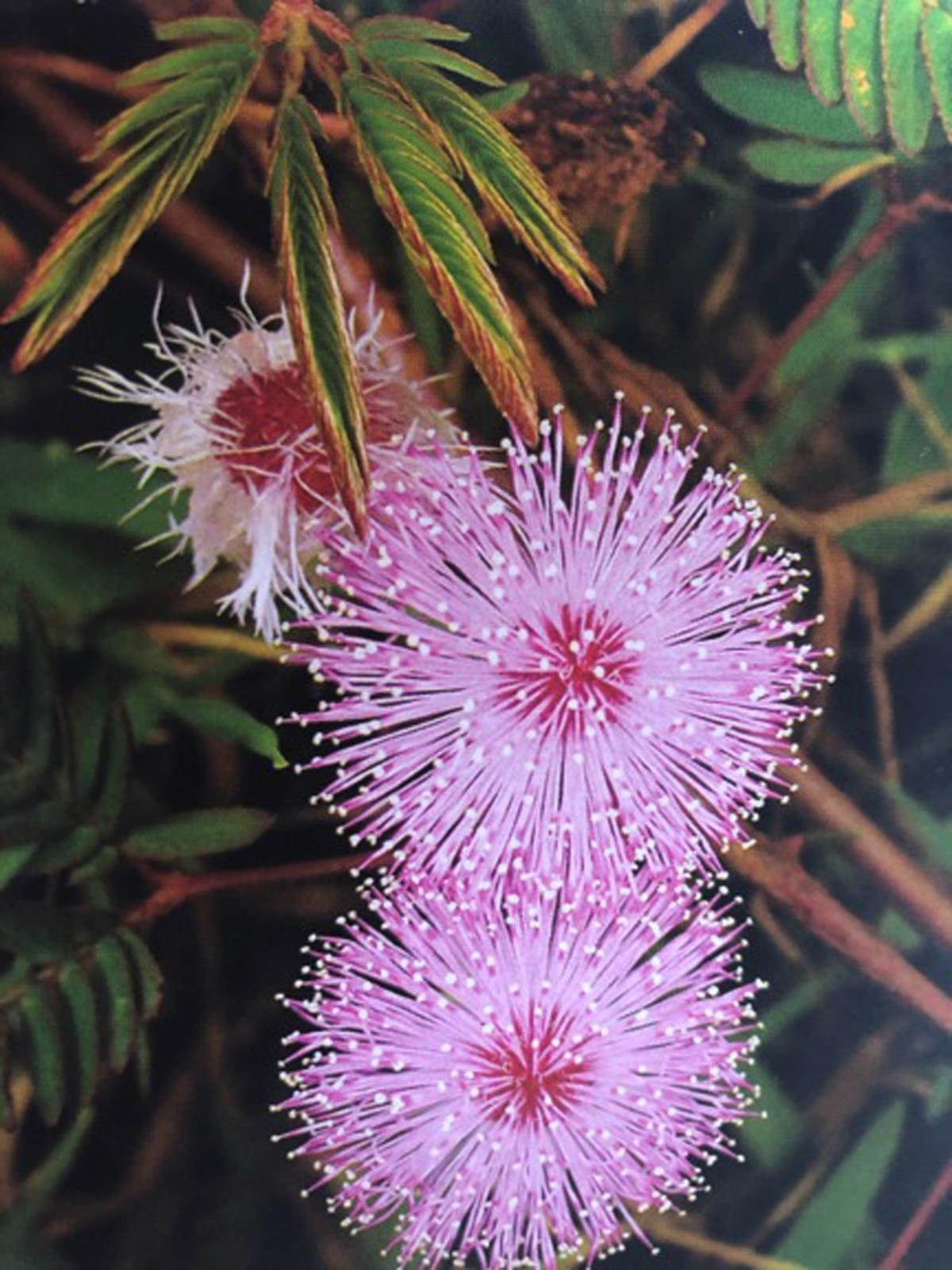 Pictured is the flower of sensitive plant or Mimosa pudica.

Pictured is a leaf of Mimosa pudica.

Pictured is the flower of sensitive plant or Mimosa pudica.

Like so many of us, I have taken plants for granted my whole life — even after studying botany in college and making a life-time hobby of collecting and learning about plants. First of all, over the last decade more than 2,000 new plant species per year have been discovered: Uses for over 31,000 different species have been documented ranging from medicinal uses, food, textiles, and building materials — just to name a few. Plants have generally been used as resources for energy, food, poisons, building material, medicines, and remedies for environmental issues and beyond. Perhaps the most important aspects of the plant world have yet to be explored...

Between four hundred and one billion years ago, plants evolved in an opposite direction from that of animals. Whereas animals and man evolved to move around to find food and to thrive, plants evolved to remain in place, receiving all the energy they required to survive from the sun and adapting their bodies to resist predation and outmaneuver innumerable constraints resulting from being anchored to the ground. Just consider how difficult is would be to survive being surrounded by herbivores, insects, and various other predators in an environment with wide fluctuations in temperature, rainfall, and other environmental conditions. Some would say the only way plants survived was to become virtually indestructible!

The fundamental differences between plants and animals are self-evident, but the most important and least recognized contrast is between the biological concept of concentration and diffusion. Any biological function in animals is concentrated in specialized organs, whereas biological functions in plants are diffused throughout the entire body of plants. In the case of animals, if one organ is damaged, death is a likely outcome. In the case of plants, any fraction of the plant that is not destroyed has the ability to fully function in spite of being decimated by 80% or more. This physiological difference between plants and animals is a fundamental structural reason for why plants appear so different from us as well as embody a functional model that is much more durable and innovative than that of animals. Their modular, diffused construction works as a cooperative with shared structures without any command centers. This construct is able to resist repeated catastrophic events without losing functionality and adapt very quickly to environmental changes. The complex anatomic organization and key features of plants require a well-developed sensory system that allows the organism to efficiently explore the environment and react promptly to potentially damaging events. Plants make use of a refined root system made up of sensitive tips able to detect and monitor concurrently and continuously at least fifteen different chemical and physical parameters. When it comes to robustness and innovation, nothing can compete with plants!

It is impossible to learn without memory, and the ability to learn is one of the requirements of intelligence. Living things are generally capable of learning from experience, and plants are no exception. Plants respond in ever more appropriate ways when known problems recur throughout their existence. Plants do not have brains, but all plants are capable of learning from experience and thus have memorization mechanisms. For example, if a tree is exposed to a stress such as drought or salinity, it will respond by modifying its metabolism or anatomy to ensure its survival. If at a later time the same plant is exposed to the exact same stimulus—perhaps even with stronger intensity, the plant responds more effectively to the stress than it did during its first exposure. The plant has preserved traces of past solutions to stress and has quickly recalled them to react more efficiently and accurately. It learned and stored the solution in its memory, thus increasing its chances of survival. All plants are capable of learning from experience as demonstrated by the French naturalist Chevalier de Lamarck (1744-1829) and Rene’ Defontaines (1750-1833) with their work with Mimosa pudica plants — plants that respond to certain stimuli in an immediate and responsive way. In the case of Mimosa pudica (or sensitive plant), the plant reacts to stimuli by closing its leaves in an action of extreme modesty when exposed to some external stimuli.

Chevalier Lamarck conducted countless experiments on Mimosa pudica to detail its response in various situations. Both researchers noted that Mimosa pudica reacted to stimuli by closing its leaves. At some point, the leaves stopped responding after frequent stimuli. Both researchers noted this behavior. Lamarck initially believed the Mimosa leaves exhausted their energy, yet many times he observed that the plants stopped closing their leaves well before their energy was exhausted. Lamarck noticed an experiment designed by Desfontaines which a provided an answer to his experimental dilemma. Desfontaines sent one of his students to take a large group of Mimosa pudica plants for a long tour of Paris by carriage at a moderate trot without stopping and to scrupulously monitor their behavior. As expected, the first vibrations of the carriage caused the plants to close their leaves. As the tour continued, the student noted that something unexpected began to happen. First one plant, then two, then five, and eventually all plants opened their leaves even though the carriage vibrations continued with equal intensity. The student was aghast and wrote in his notebook that “The plants are getting used to it!” Although the results were published they were soon forgotten — that is until May 2013, when Monica Gagliano, a researcher from the University of Western Australia served as a guest researcher in Stefano Mancuso’s laboratory in Italy for six months. She modifed Desfontaines’ carriage ride experiment to one in which the plants would be placed in jars, and subjected to repeated falls from a height of 4 inches. The precisely quantifiable drop represented the stimulus. The results confirmed those of Desfontaines observations when after about 7-8 drops, the plants began to open their leaves for the rest of their journey. To determine whether this result was due to plant fatigue or if indeed the plants understood that there was nothing to fear a second experiment was implemented. In this case the plants were shaken in jars horizontally after the drop experiment. The plants immediately reacted by closing their leaves and thus were determined not to be experiencing fatigue. This set of experiments proved that plants can learn that certain stimulus was harmless and distinguish it from other potentially dangerous ones and that they can remember it as a past experience. The final question to answer is how long does that memory last?

The researchers, Mancuso and Gagliano, had hundreds of plants that were trained to distinguish between the two stimuli. After a brief rest from experimentation, the plants were then retested over a period of time to determine the retention length of what they had learned. The Mimosa pudica remembered for more than forty days, which is considered a very long time when compared to the standard memory span of many insects and closer to the retention standard of several superior animals.

Plants demonstrate a host of behaviors that confirm the genius of their species from memories without brains to moving without muscles, their art, and ability to mimic other plants. Only recently scientists have begun to uncover the source of plant’s intelligence as reported in a 2016 issue of the journal Cell Reports. The report provides evidence that a certain sequence of ribonucleic acid (RNA) controls the time of flowering of plants in spring by detecting how long it has been since their exposure to cold — a biological mechanism called epigenetics. Epigenetics acts to activate some of an organism’s genes while inhibiting the expression of others.

It is no wonder why so many of us are drawn to — if not addicted to the plant world! Perhaps we will explore in more detail the amazing genius of plants in future essays.

Additional information/publications on horticulture can be found at the University of Georgia’s Extension Website, http://extension.uga.edu/. In addition, the local UGA Douglas County Extension Office is available to assist: uge2097@uga.edu or 770-920-7224. For suggestions for future articles, you may also email douglasaskamaster gardener@gmail.com.