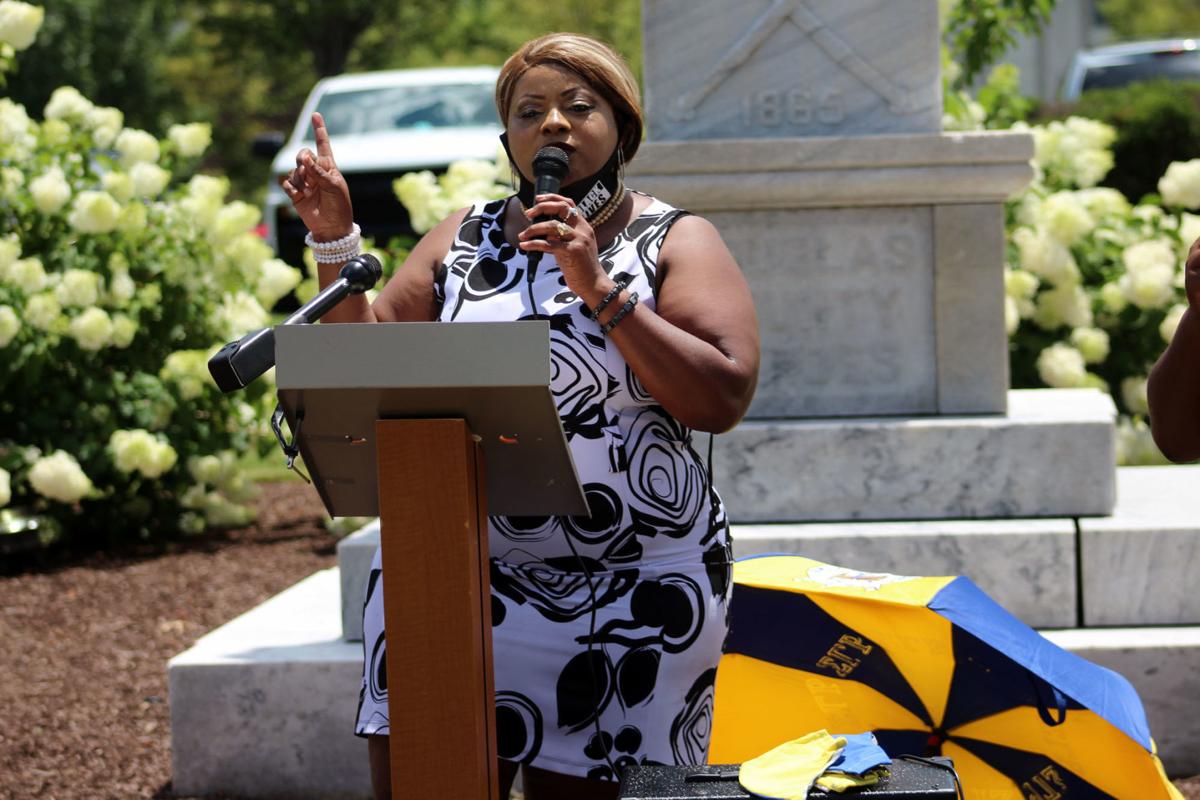 Triana Arnold James, president of the Georgia National Organization for Women, speaks during a press conference to request the county remove the Confederate monument on the Douglas County Courthouse lawn. 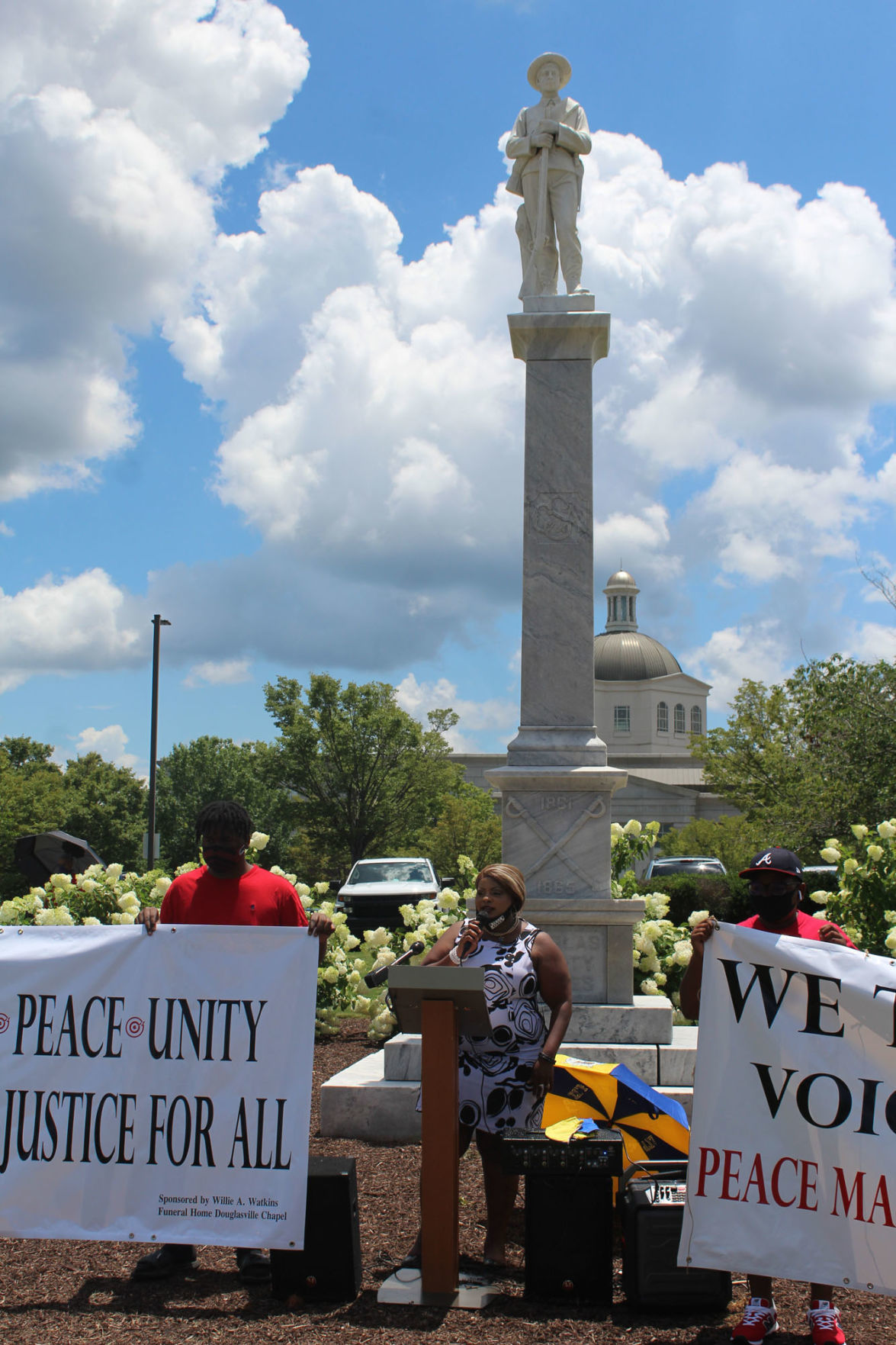 A press conference was held Thursday by Triana Arnold James, president of Georgia National Organization for Women, to ask the county to remove the Confederate monument on the lawn at the Douglas County Courthouse.

Triana Arnold James, president of the Georgia National Organization for Women, speaks during a press conference to request the county remove the Confederate monument on the Douglas County Courthouse lawn.

A press conference was held Thursday by Triana Arnold James, president of Georgia National Organization for Women, to ask the county to remove the Confederate monument on the lawn at the Douglas County Courthouse.

An activist group is calling for the removal of a Confederate monument at the Douglas County Courthouse.

Triana Arnold James, the president of Georgia National Organization for Women, held a press conference in front of the statue that is located on the courthouse grounds to “call to action” residents to petition county commissioners to remove it.

The monument was erected by Douglas County chapter of the Daughters of the Confederacy and was moved from its original location at the old courthouse to the new courthouse in 1998.

It is currently located in front of the courthouse at the corner of Hospital Drive and Dorris Road.

Historian Lisa Cooper says the soldier depicted is anonymous and not based on any one soldier who was from old Campbell County.

Douglas County did not exist during the Civil War and was not formed until 1870 from the northern section of old Campbell County and eventually parts of Carroll and Paulding counties, according to Cooper.

James said the time has come for the statue to find another location.

“I felt the need to speak out on this issue,” James said. “Douglas County is a very diverse county. It is not like it use to be in 1914 or 1998. Because the county is very diverse and has pretty good representation, it needs to be removed. The Confederacy represented a very bad time. This statue should be taken down.”

Several people in opposition of the statue removal were in attendance, and some voiced their opinions as they tried to drown out the speakers.

James and those in favor of the statue removal begin chanting, “No justice, no peace.”

From WikiLeaks to Colonial Pipeline, a history of cyberattacks in the US

“This statue has a place in history, but not at the courthouse,” said James, who pointed out to the crowd that she was a 20-year military veteran. “I spent half my life fighting for equal representation. I took an oath to defend the Constitution. We will not stop protesting and marching.”

Throughout the press conference, a man in opposition of the removal, shouted: “All people are equal, some more equal than others.”

“You are here to divide us,” the gentleman shouted as several people spoke, including probate judge-elect Christina Peterson.

“This statue has a place — in a museum,” said Brandon Pennamon, who is on the Douglas County Planning Board. “Our commissioners have a chance to make a change.”

In recent weeks, several confederate monuments have been removed from government properties across the nation.

The removal of the confederate statues comes as protest have erupted across the nation over the death of George Floyd in Minneapolis and AAA AAA in Brunswick. Floyd died last month after a former Minneapolis police officer knelt on his neck during an arrest.

Ahmaud Arbery, a Black unarmed jogger, was shot in the street as three men alleged they were making a citizen’s arrest.

Georgia state laws state that “No publicly owned monument honoring Confederate soldiers shall be relocated, removed or altered in any fashion.”

However, last week a DeKalb County judge ordered the removal of a 30-foot obelisk in the Decatur Square.

“The confederacy was built on slavery during a terrible time in the history of the United States of America,” James said. “The confederacy represents the continuation of the oppression of black and brown people. It’s time for us to remove symbols that annotates oppression and suppression of people and start to build a bridge that presents diversity.”