Sign Up
Log In
Purchase a Subscription
You have permission to edit this article.
Edit
Home
News
Sports
Community
Opinion
Obituaries
Your School
e-Edition
Classifieds
Share This
1 of 5 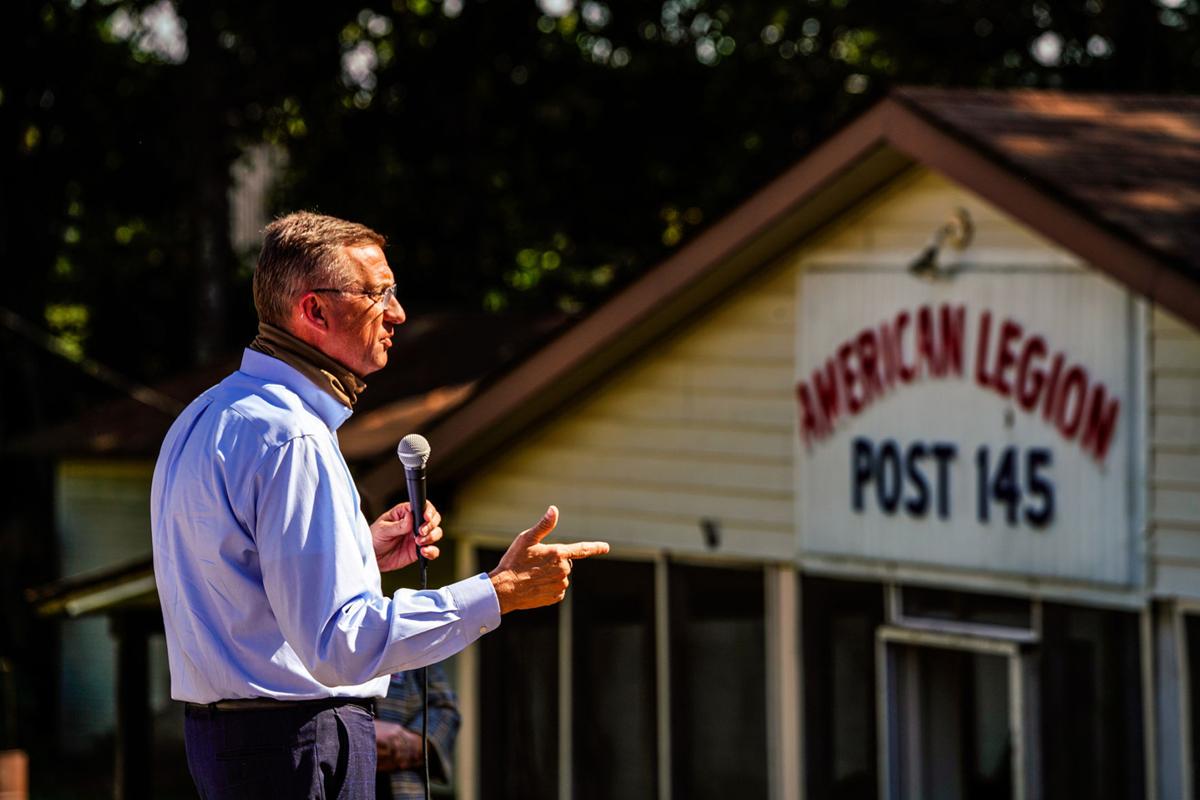 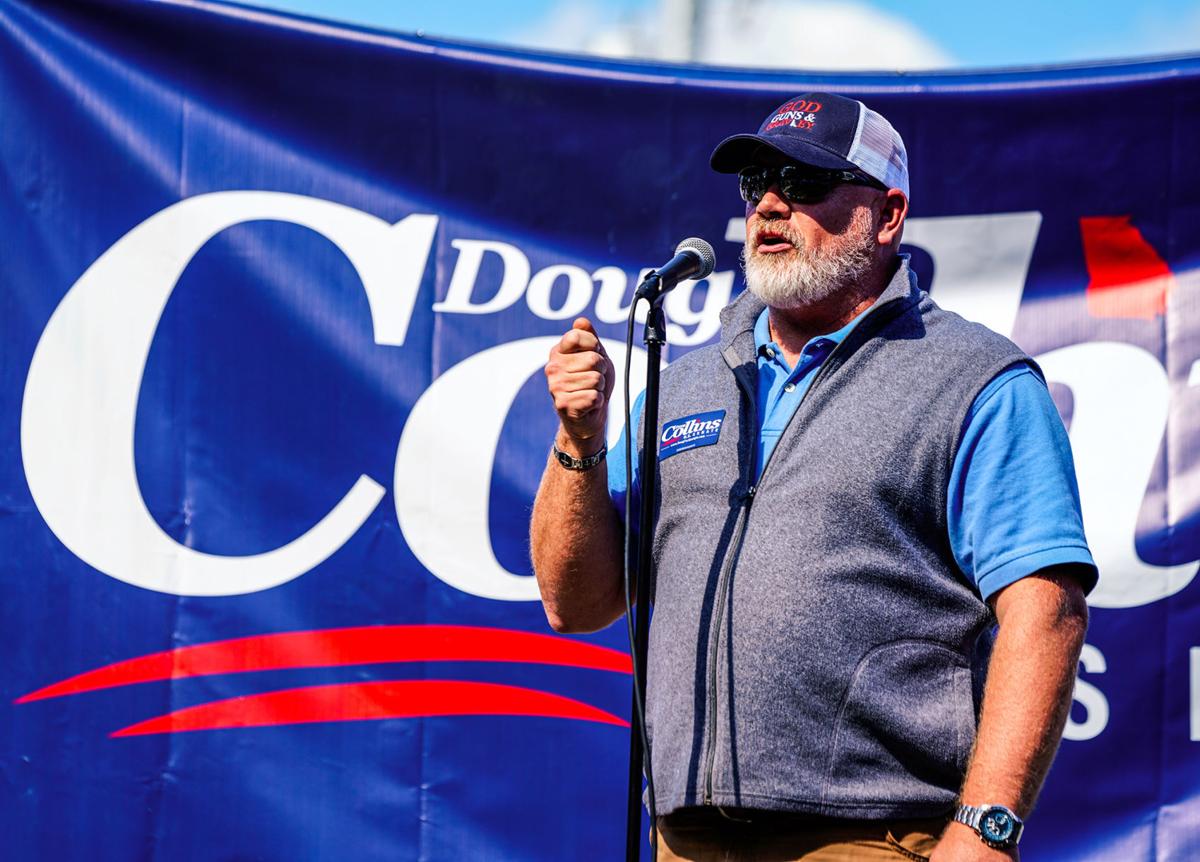 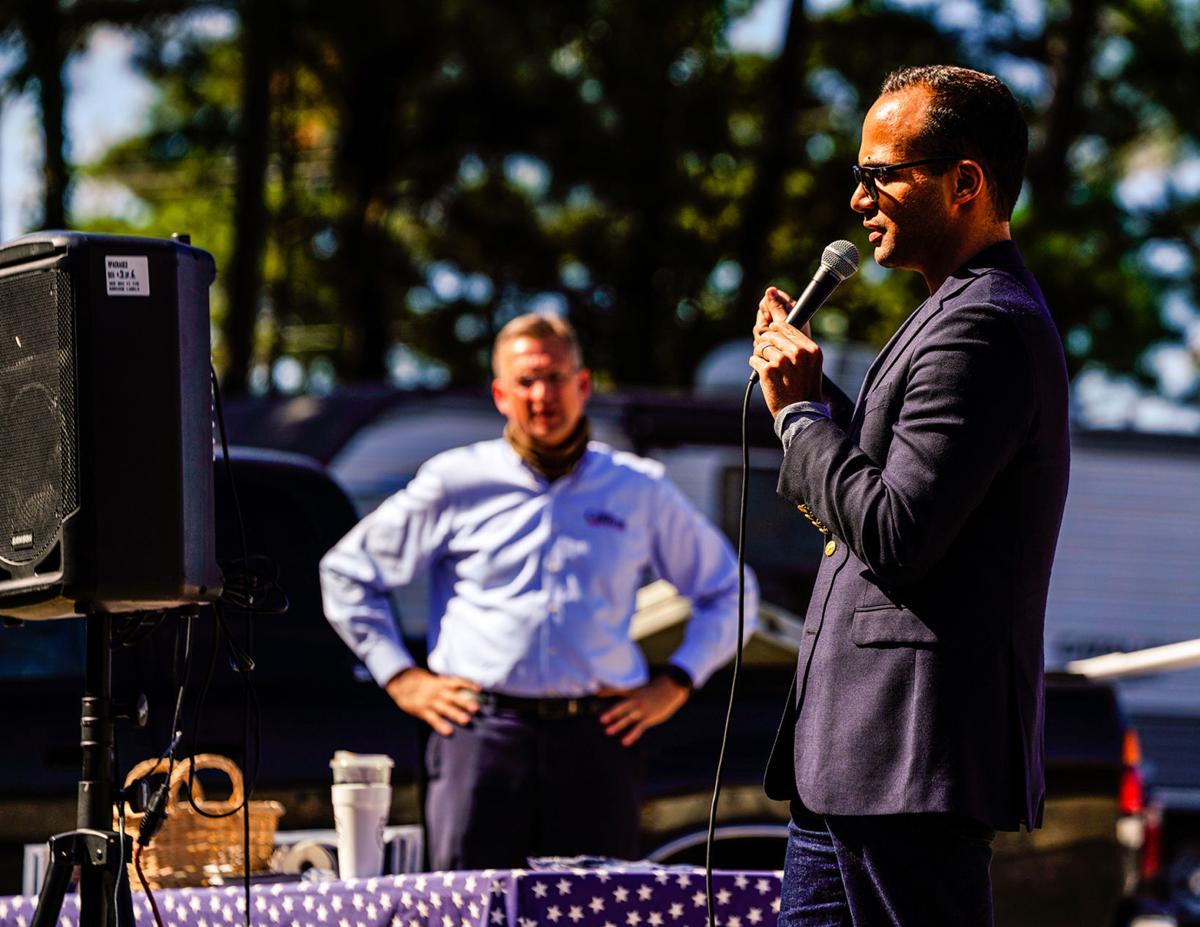 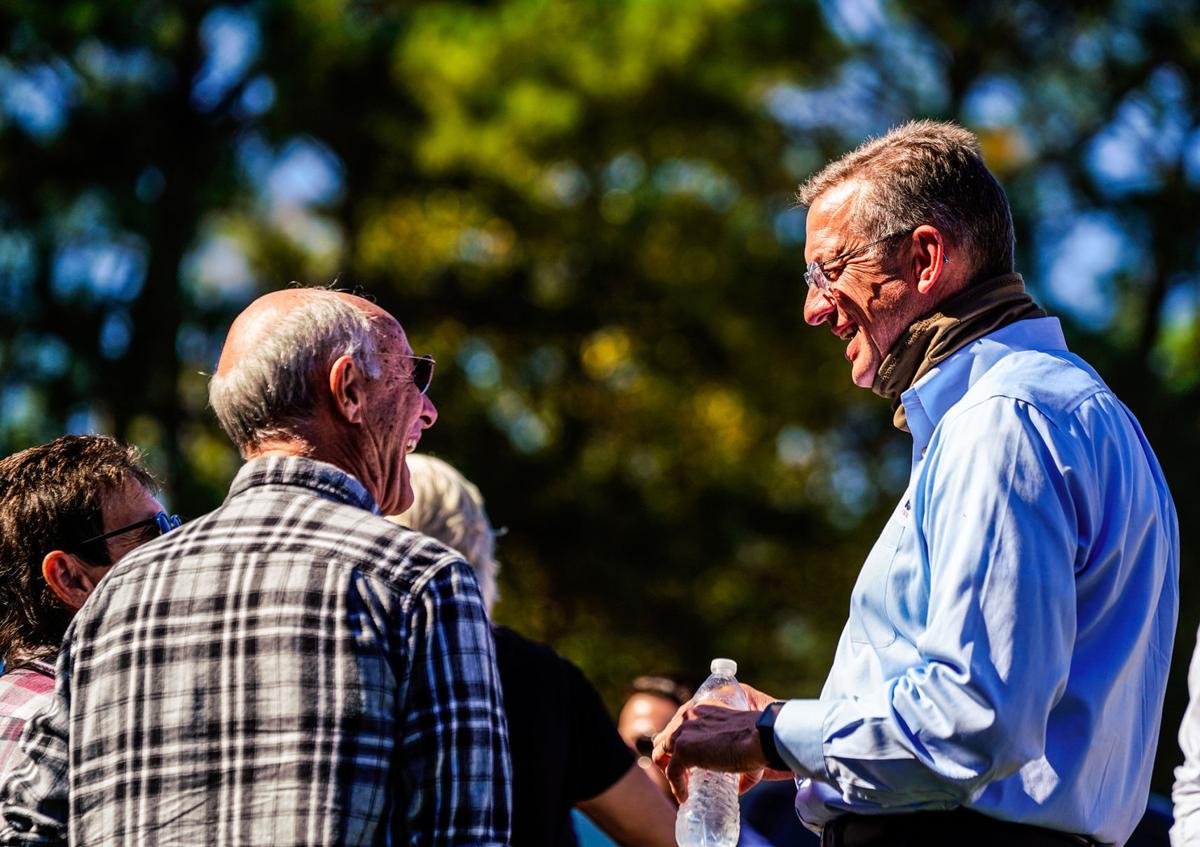 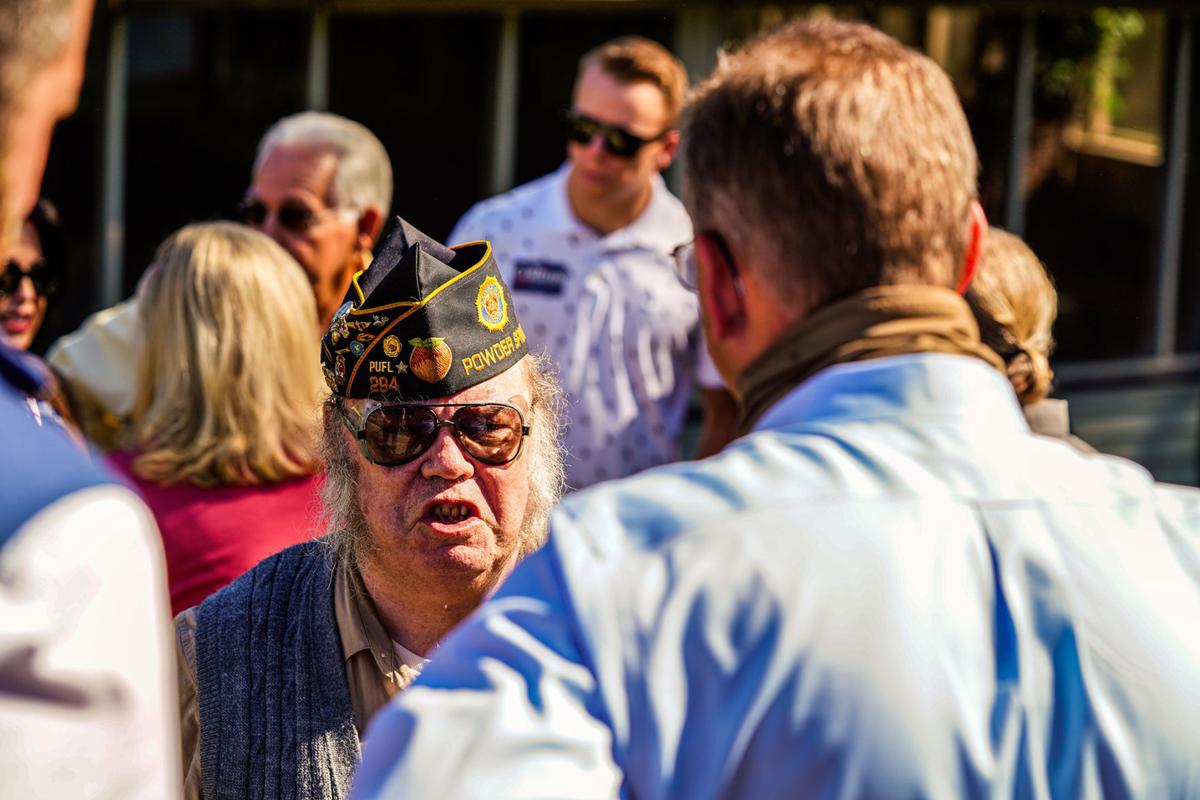 A local veteran talks with Congressman Doug Collins at American Legion Post 145 in Douglasville on Tuesday. Collins, a Gainesville native, is a veteran who served in Iraq.

A local veteran talks with Congressman Doug Collins at American Legion Post 145 in Douglasville on Tuesday. Collins, a Gainesville native, is a veteran who served in Iraq.

Congressman Doug Collins brought his campaign for the U.S. Senate to American Legion Post 145 in Douglasville on Tuesday.

Collins started his 17-day “Trump Defender Statewide Tour” of about 60 cities Saturday in the runup to the Nov. 3 election. He is one of 21 candidates vying for the U.S. Senate seat Kelly Loeffler was appointed to this year by the governor after former Sen. Johnny Isakson retired.

The top two vote-getters will move on to a January runoff unless one of them gets at least 50%. Collins and Loeffler are the GOP frontrunners, while Raphael Warnock has consolidated Democratic support.

Collins told the crowd of about 40 Republicans in Douglasville on Tuesday that conservatives have the best vision and best message.

“Then why are we down?,” Collins asked the crowd. “It’s time for us to go into a county like Douglas, which is changing a little bit. But you know why I think it’s changing — because we have been bashful about saying why it actually matters.”

In a shoutout to Alexander High standout linebacker Wesley Smith, who was at the event, Collins said, “ We need a middle linebacker to go out and start tackling issues.”

“He was a voice for the president, Donald J. Trump, our president,” Gravely said of Collins. “He was fighting for him. He called the Democrats to task on this bogus impeachment trial. He was out front. He made Georgia proud.”

George Papadopoulos, who joined President Trump’s election campaign in March 2016 and was a key figure in the FBI’s Russia investigation, also praised Collins’ defense of Trump at the Douglasville event.

“When the going went tough, Doug Collins was there,” Papadopoulos said. “I like fighters. I like being on offense. And I like people that shake things up. And that’s exactly why I support Doug Collins.”

Collins, a Gainesville native, is a veteran who served in Iraq in 2008 and 2009. He’s also a pastor and a lawyer who served in the Legislature before winning a seat in Congress for the Ninth District of Georgia in 2012.

His wife Lisa, who was with him in Douglasville, is a retired public school teacher.

Collins talked about the First Step Act, which he cosponsored, that is aimed at reducing recidivism by directing federal prisons to help those incarcerated with things like job training to make them more successful when they reenter society.

Collins also spent much of his time in Douglasville going after Loeffler, who he said has spent $35 million “to try and go out and buy elections.”

“If you’re going to spend that much money you at least ought to buy the truth when you find it instead of spreading lies,” Collins said.

Collins talked about his pro-life stance on abortion, telling the crowd he sponsored the “ultrasound and fetal pain” bills when he served in the Georgia House.

Collins said that Loeffler and the WNBA’s Atlanta Dream, which she co-owns, helped Planned Parenthood raise money “so they could carry out their abortion agenda.”

“She doesn’t want you to know that,” Collins said. “I’ll tell you right now, Kelly, that’s not conservative. That’s not pro life. And that’s not what Georgia believes in.”

Collins said he’s a staunch supporter of Second Amendment rights, telling Douglasville Republicans that as the son of a State Trooper he was “learning to shoot before I could ride a tricycle well.”

He then accused Loeffler of working with former New York Mayor Michael Bloomberg “on a gun control agenda.”

Loeffler’s husband owns the New York Stock Exchange. Collins said that while Loeffler “talks real tough on China” there are “10 state-owned companies of China listed” on the stock exchange. Collins said Loeffler should “delist the companies” and that by not doing so she is choosing her “pocketbook over policy.”

Collins said Loeffler has attacked him for being pictured with former Democratic state Rep. Stacey Abrams, who lost a close race for governor two years ago.

Collins said the photo was taken 10 years ago when the HOPE Scholarship was going bankrupt.

“She came and said she wanted to help,” Collins said. “Now it’s being used against me to say I’m not a conservative.”

Collins said Abrams worked for Loeffler’s basketball team as an attorney. He said there is a photo showing Loeffler giving Abrams a plaque for her work with the team.

After his speech, Collins told the Sentinel that while Douglas County has been trending more Democratic in recent years, he doesn’t “write off any part of the state.”

“You definitely won’t see Ms. Loeffler because she doesn’t come to events like this,” Collins said, noting he is a member of the American Legion.

He added: “I actually have a record. I actually am a conservative who didn’t have to change their views. … You’re not going to go in my past and see where I gave money or helped Planned Parenthood. You’re not going to go back and see I helped Michael Bloomberg. I never hired Stacey Abrams — I’ve known her for a long time but she never worked for me and I never honored her as a great Georgian. It’s just a difference. We can battle ideas all day long. But I know who I’ve been because I have a record of public service. She was told, ‘Here is what you have to become’ and that’s what she’s doing.”