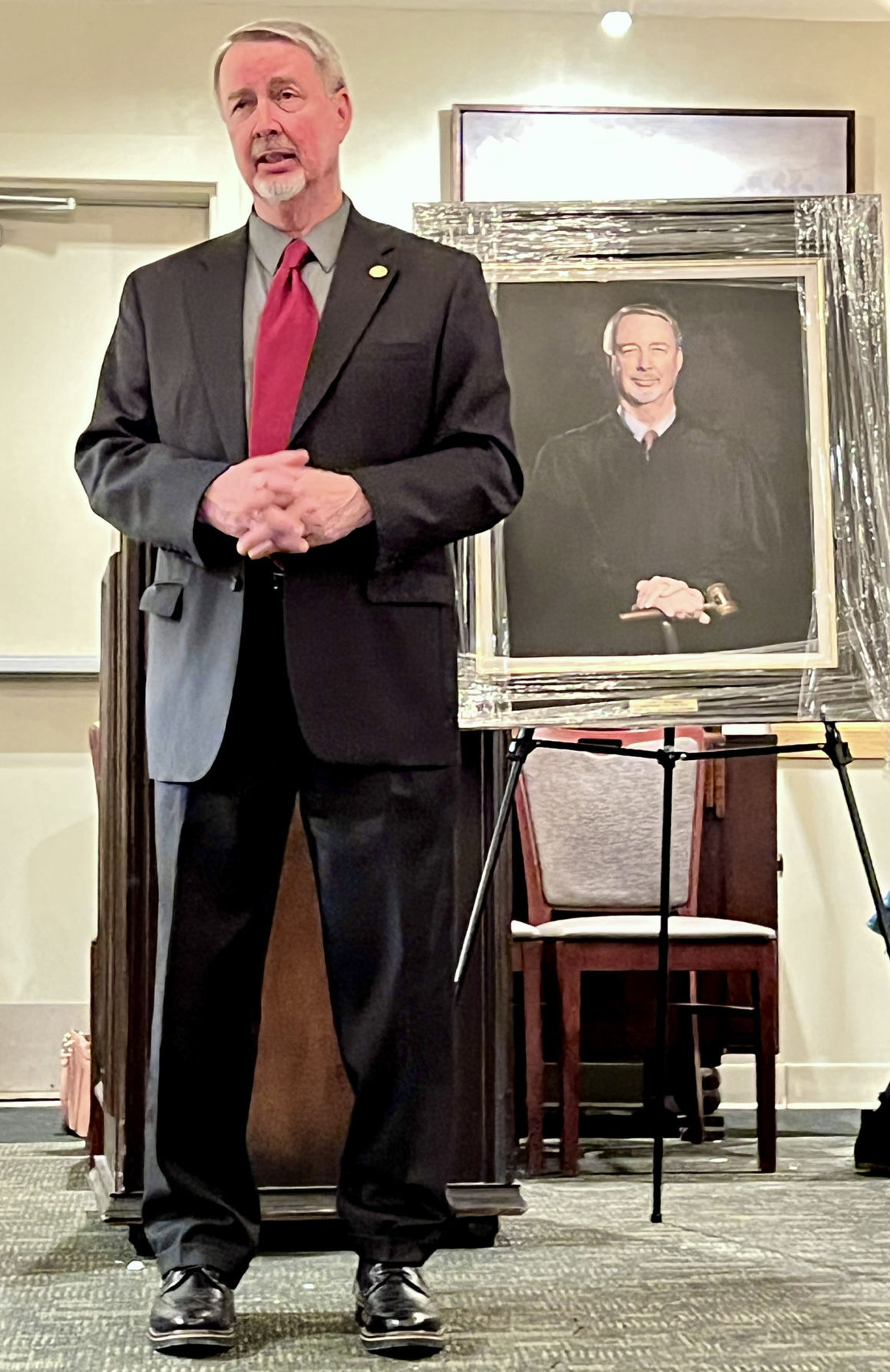 Chief Superior Court Judge David T. Emerson speaks at his retirement party Tuesday at Sam & Rosco’s. His portrait was unveiled during the gathering, which was attended by family, friends and colleagues. 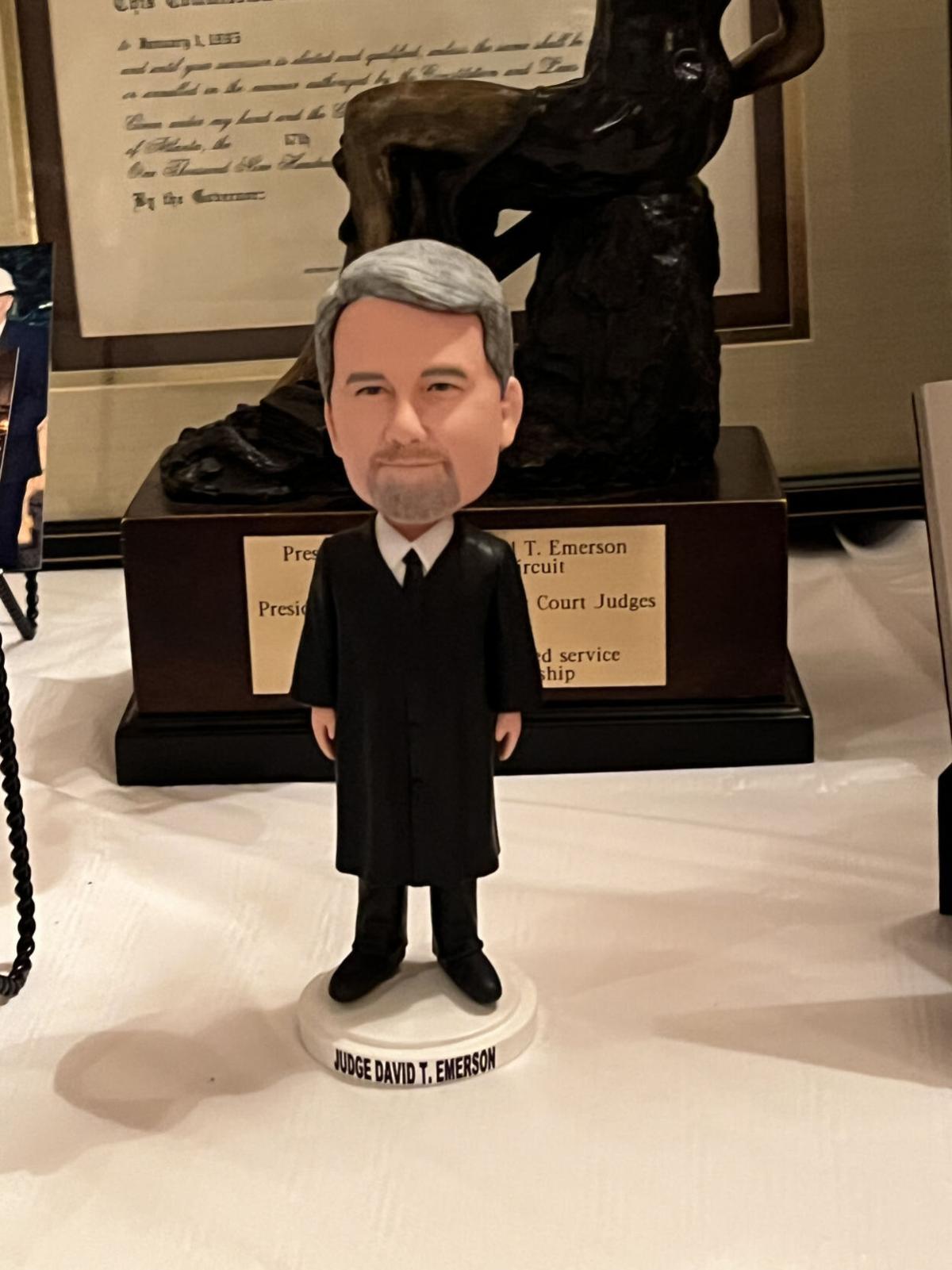 A bobblehead of Judge David T. Emerson was among many personal items on display Tuesday. 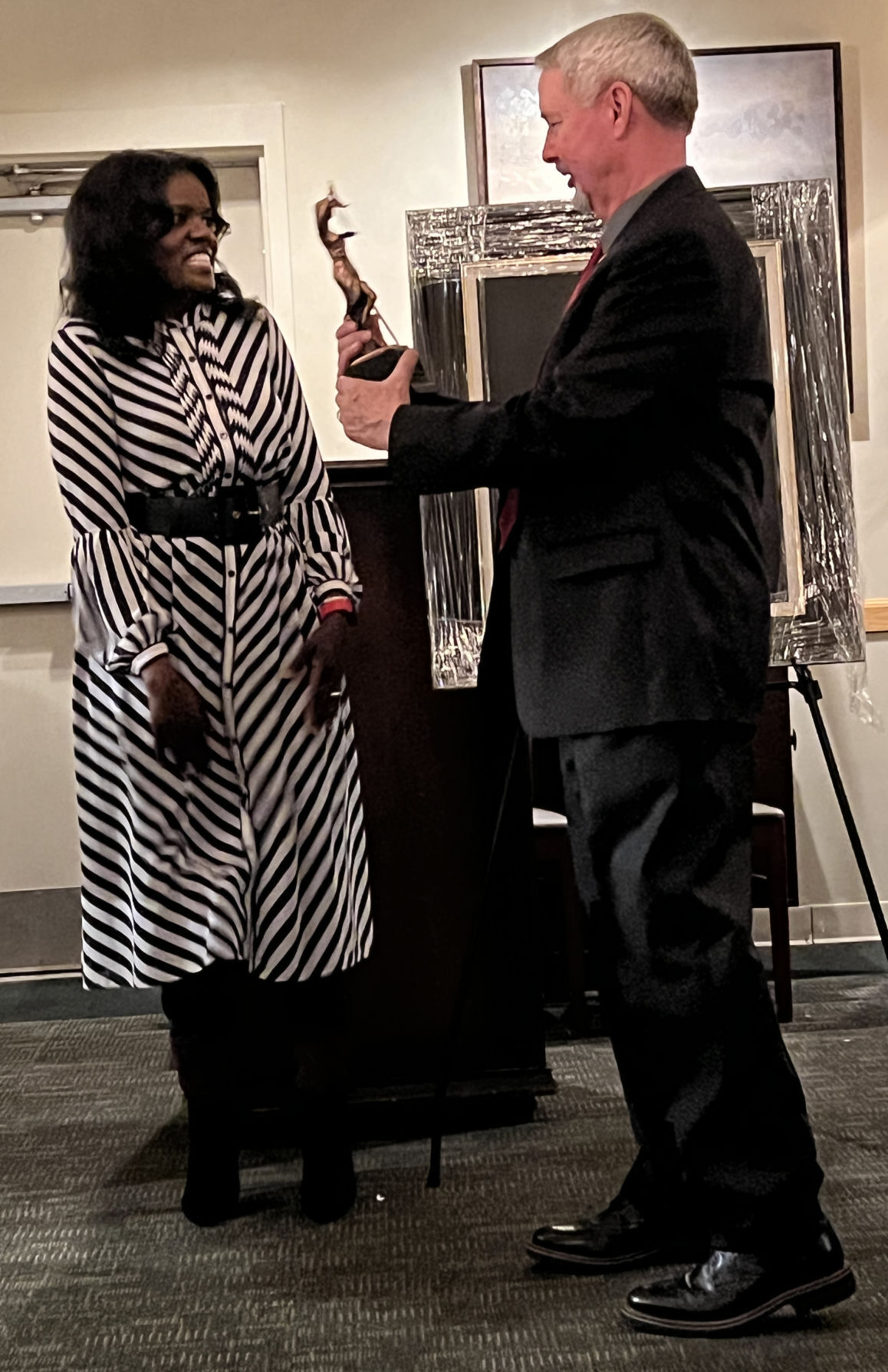 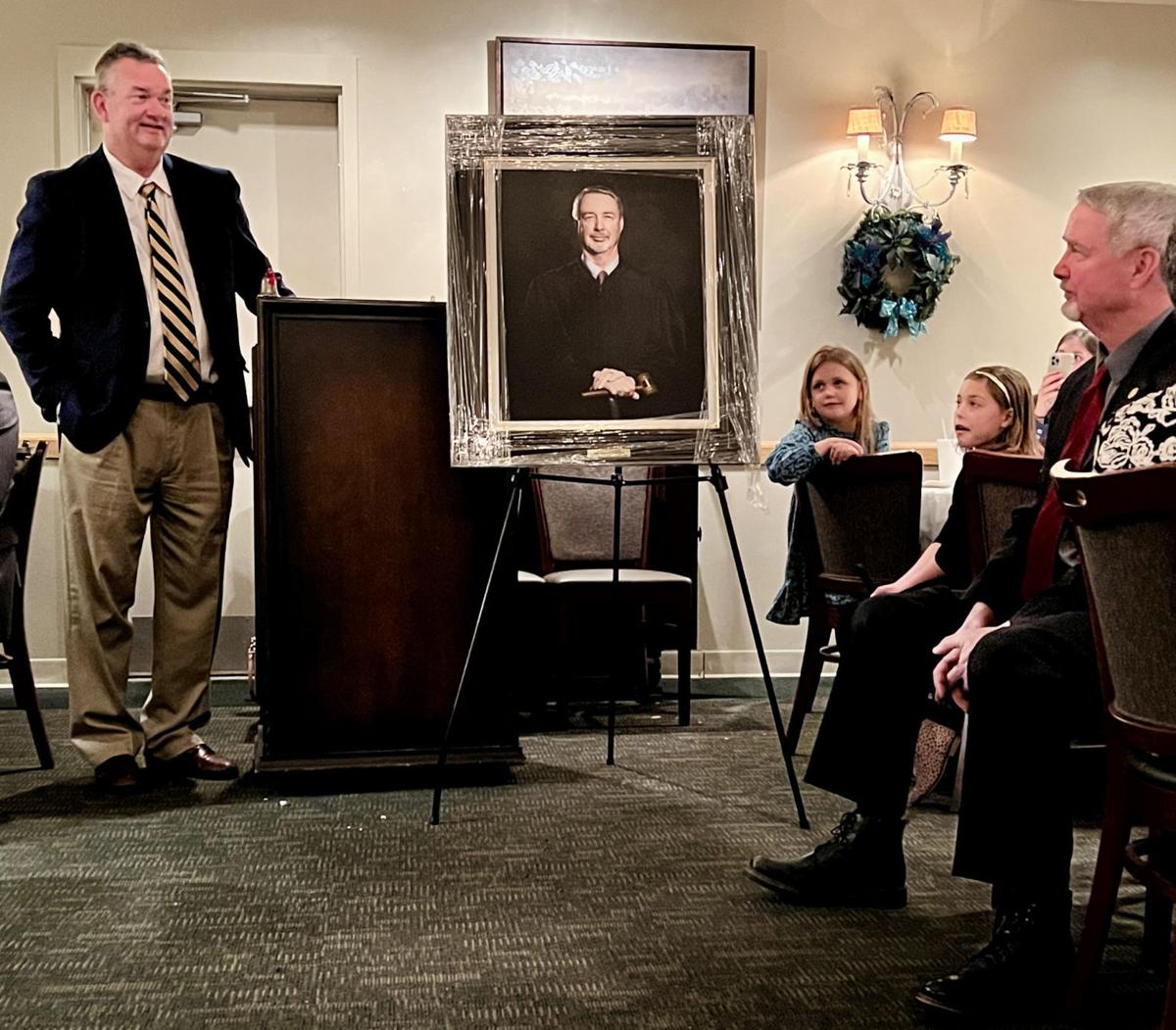 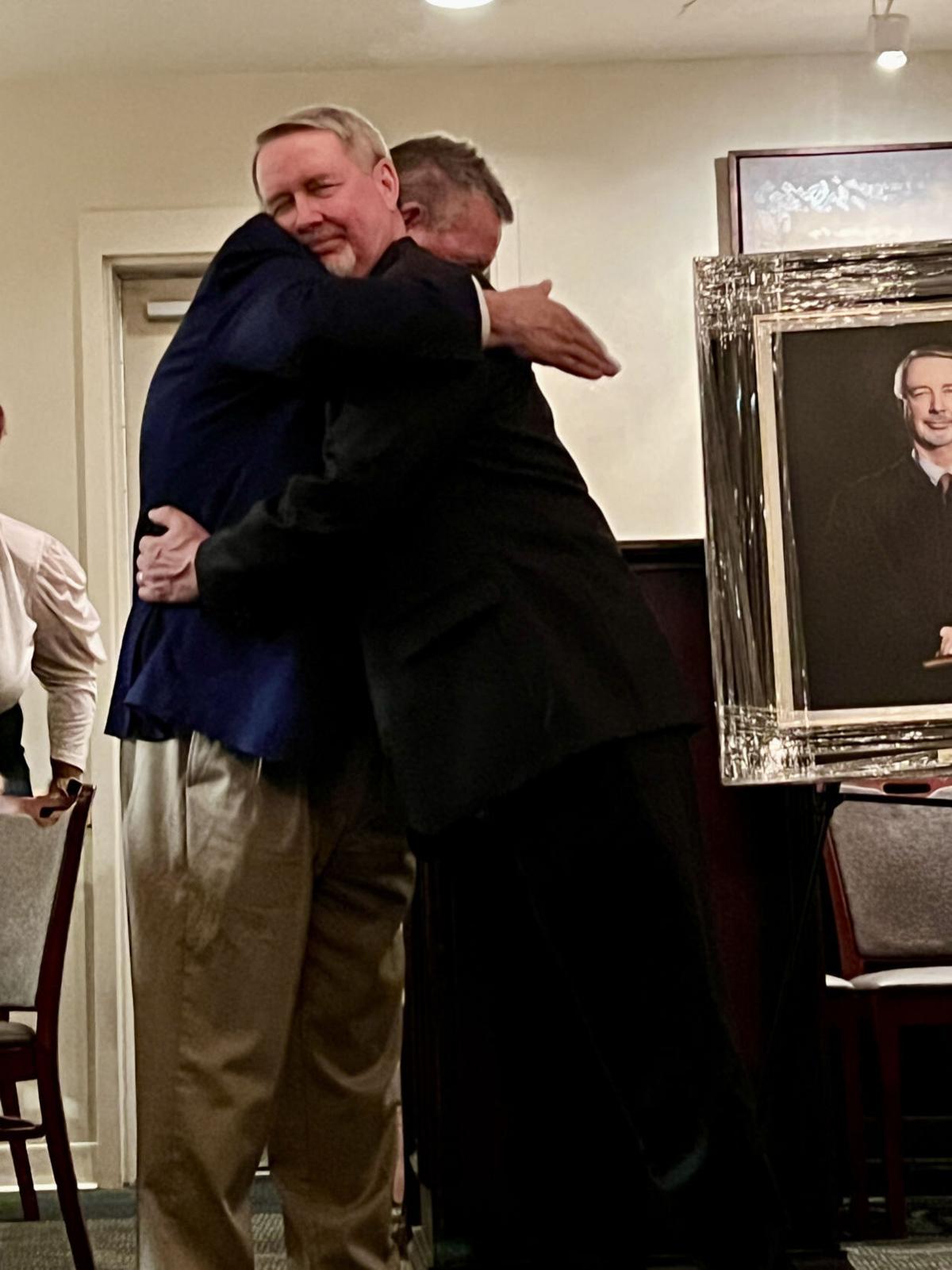 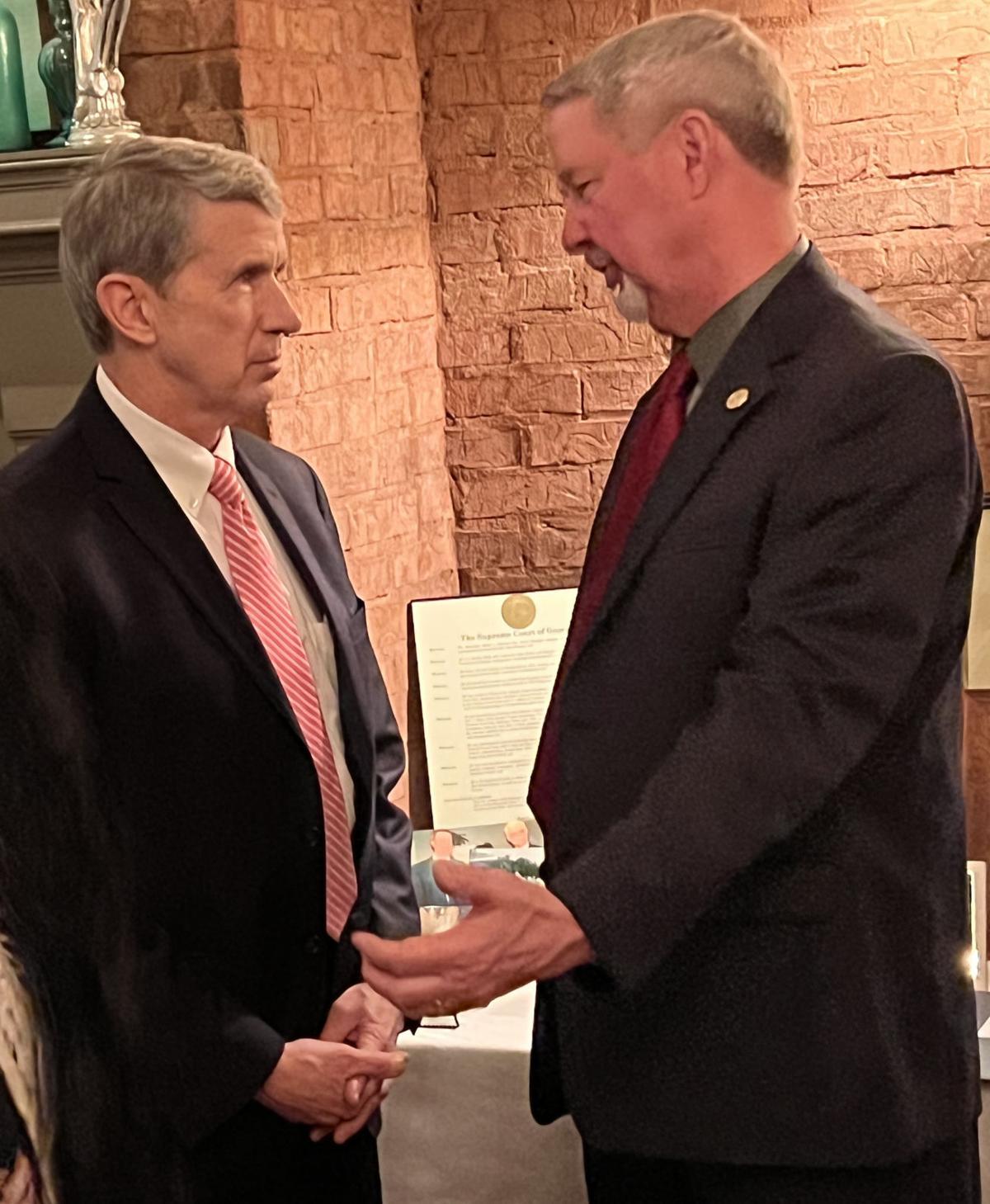 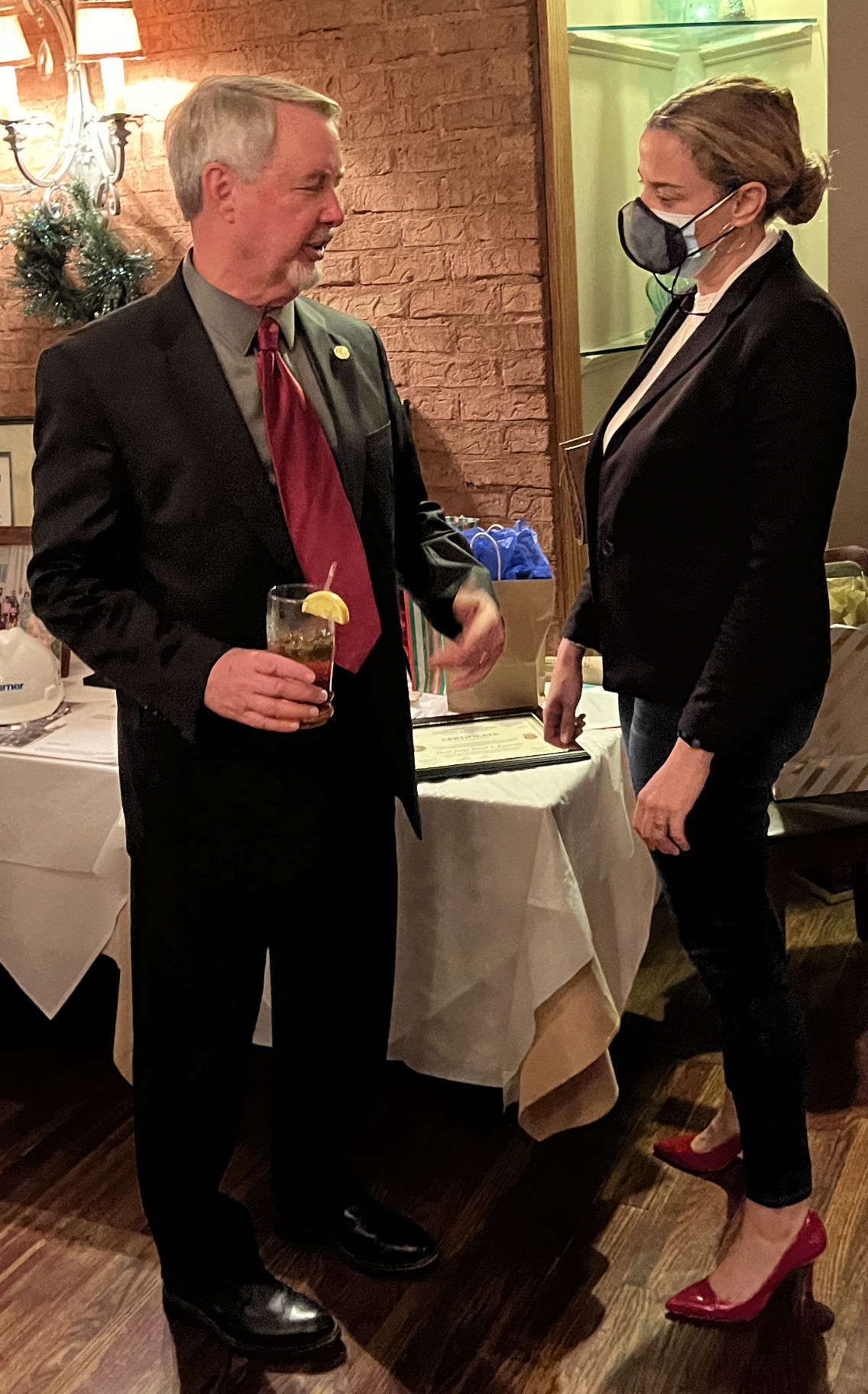 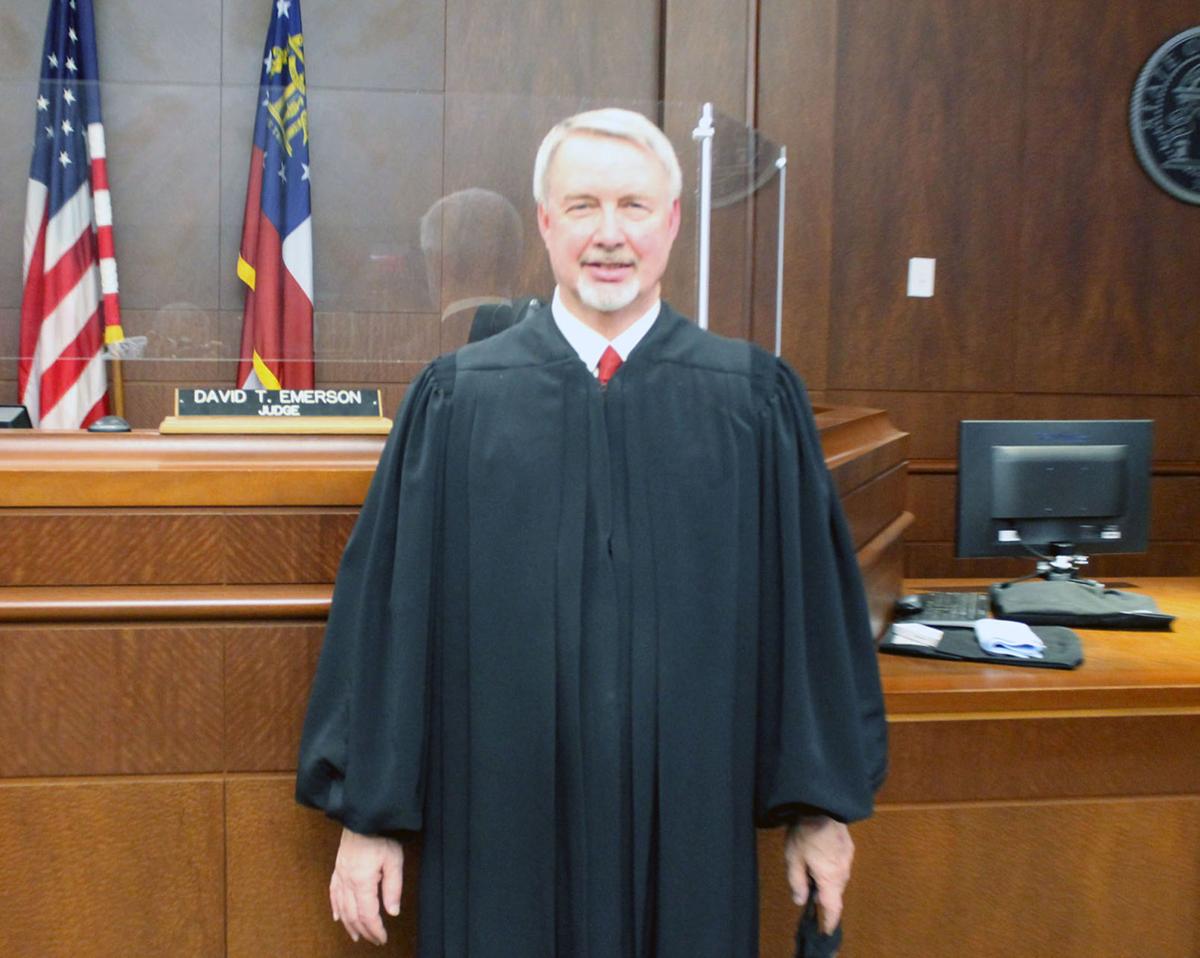 Douglas County Chief Superior Court Judge David T. Emerson retired at the end of 2021 after 31 years on the bench.

Chief Superior Court Judge David T. Emerson speaks at his retirement party Tuesday at Sam & Rosco’s. His portrait was unveiled during the gathering, which was attended by family, friends and colleagues.

A bobblehead of Judge David T. Emerson was among many personal items on display Tuesday.

Douglas County Chief Superior Court Judge David T. Emerson retired at the end of 2021 after 31 years on the bench.

Emerson will hang up his robe for a final time on Friday and begin his retirement after 31 years on the bench in Douglas County.

A portrait of Emerson was unveiled at the start of a roughly 30 minute program Tuesday.

The local bar presented Emerson with a photo of the courthouse signed by members.

McClain introduced Emerson, listing the “measure of a man” of his friend and fellow jurist, and occasionally bantering with one of Emerson’s young granddaughters.

“Samuel Johnson once said that the true measure of a man is how he treats someone who can do him absolutely no good,” McClain told Emerson at the end of his introduction. “That is the kind of judge that we have had in you. And you’ll be greatly missed. But as you leave us, sir, let our applause ring in your head and let our thanks reside in your heart.”

Emerson spoke briefly about his love for the county and its people. He said he had worked hard with other judges across the state to improve the justice system.

“I’ve been blessed to get the opportunity to contribute to that,” Emerson said. “And if I’ve done a good job here, and I hope I have, it’s been my great joy to do that.”

McClain noted that Emerson and his wife Carol have been married 43 years and have three children and nine grandchildren.

Emerson has spent his entire 45-year professional career in Douglas County, having practiced law for 15 years before being elected in 1990.

He became chief judge of the Douglas Judicial Circuit after Judge Robert J. James retired at the end of 2016.

McClain pointed out Tuesday that Emerson was only the third chief judge in the Douglas Judicial Circuit’s 40-year history. Judge Robert J. Noland was the first chief judge of the Douglas circuit when it was formed in the early ‘80s.

“That to me is a testament to the competence, ethics and professionalism of the Douglas Judicial Circuit which is exemplified by our superior court, our state court, our magistrate court and our juvenile court. Because we’ve always gotten along with each other in no small thanks to Judge Emerson and Judge James and Judge Howe and many others,” said McClain, who will become the Douglas circuit’s fourth chief judge on Jan. 1, 2022.

McClain said that another measure of a man is how he’s regarded by his peers. McClain talked about Emerson’s service as past president of the Council of Superior Court Judges, which governs all superior court judges in the state. He said Emerson has “trained hundreds of judges” at judicial conferences.

He also talked about Emerson’s technological expertise, which the court system has utilized heavily since COVID-19 began. McClain said the county’s three superior court judges had resolved 3,640 criminal and civil cases this year, frequently using video to communicate with the parties.

“We had something that no one else had,” McClain said. “We had Judge David T. Emerson, who is the acknowledged judicial leader in the entire state of Georgia when it comes to technology. What I like to call a total computer nerd.”

“I have tried cases in front of him and worked with him to address many issues facing our community. I have always found him to be well informed on the law and determined to do the right thing regardless of the opinion of others. He has been a steady leader for the bench during the COVID pandemic. Judge Emerson has always been known as a judge that follows the law no matter what. I have a tremendous amount of respect for him. He has served Douglas County well and he will be missed,” Fortner told the Sentinel.

“Judge Emerson has been a pillar of the legal community for over three decades. He has been steadfast in his commitment to fairly doing justice for all. We will miss his steady presence on the bench,” she said.

Judge James, who attended Tuesday’s gathering for Emerson, once said that being a judge “is a form of isolation,” something with which Emerson said he is familiar.

“Judging is a very lonely job,” Emerson said. “Fortunately I have always had good judicial colleagues including Judge Bob James, Judge Don Howe and Judge Neal Dettmering throughout the 30-plus years with whom I could discuss the challenging legal issues that came up along the way.”

Emerson, on a break from a recent jury trial, said he decided to run for judge in 1990 because he felt the county needed someone with both criminal and civil experience.

Emerson was also asked about what he deemed the most memorable moment of his career.

“My most memorable moment as a judge was the day the Turner Construction Company’s crane successfully set the crown on the courthouse dome in place on the first try,” he said. “I don’t know what our county justice system would have done if we had not built our current facility.”

Asked what he will miss most, he said he’ll miss his “staff and my colleagues as well as the opportunity to serve our community.”

“As I told the governor in my resignation letter, it’s been the greatest privilege of my life to be able to serve the people of Douglas County since 1991 as one of their superior court judges,” he said.

McClain said he has known Emerson since he was in private practice more than three decades ago. When Emerson was elected, McClain — then an assistant district attorney — was assigned to be lead prosecutor in Emerson’s courtroom.

“It didn’t take him long to become an excellent judge and one of the things I liked most about him was that if you made a sound legal argument he would always rule with you, because he was a scholar of the law,” McClain told the Sentinel. “He is also a man of deep conviction, Christian faith, and unwavering principle. He has always declared what the law is instead of making decisions with regard to politics, something that we seem to be losing these days.”

McClain added: “It’s a unique experience to try numerous cases before a judge and then later become his colleague on the bench. At every turn Judge Emerson was there to make me a better judge than I could have ever been without him. We are about to lose 45 years of legal experience which is priceless and irreplaceable. The courthouse is not going to be the same without him, but I am certain he will still find ways to contribute in retirement and will remain a devoted resident of our community, which he and his wife love very much.”