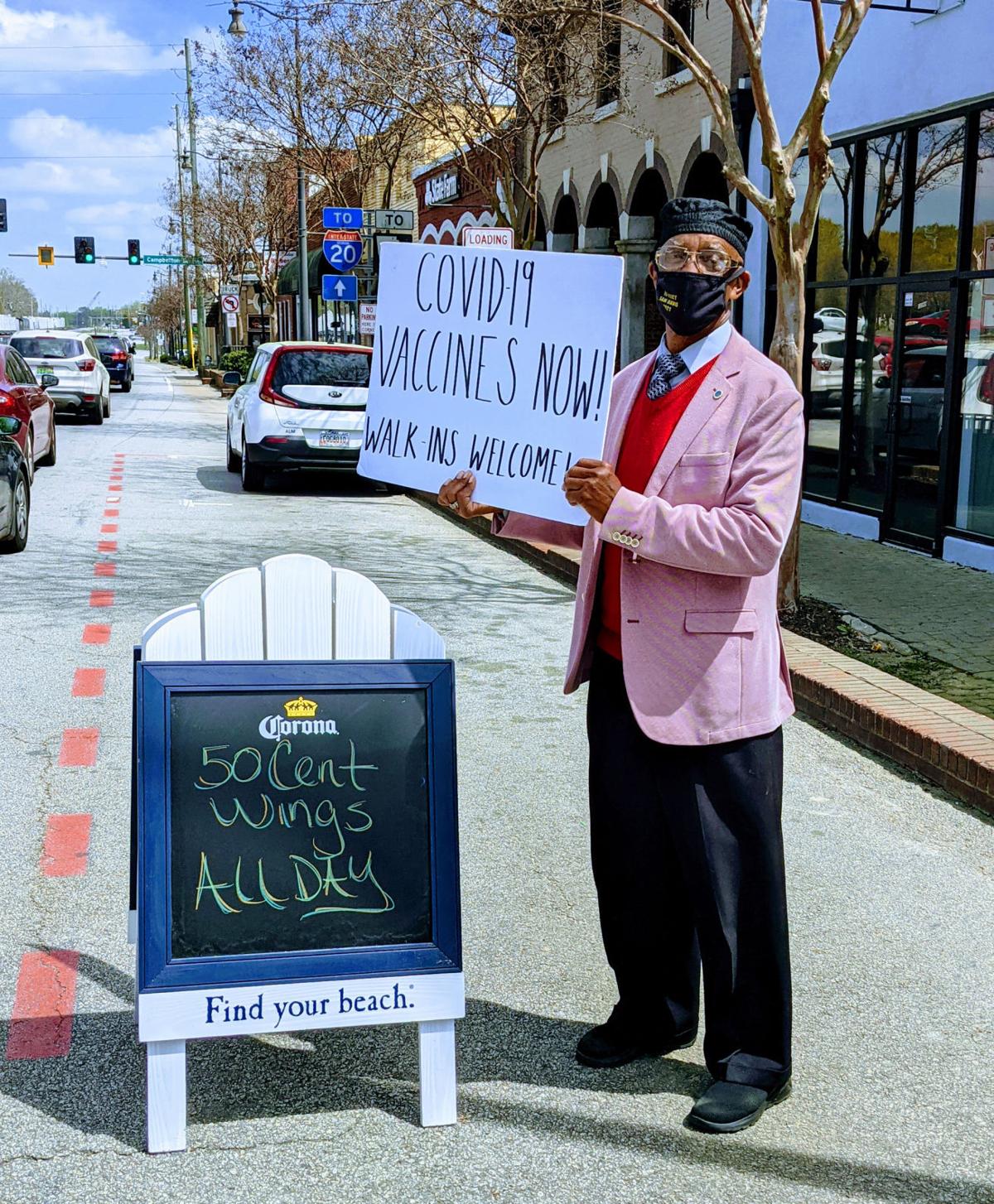 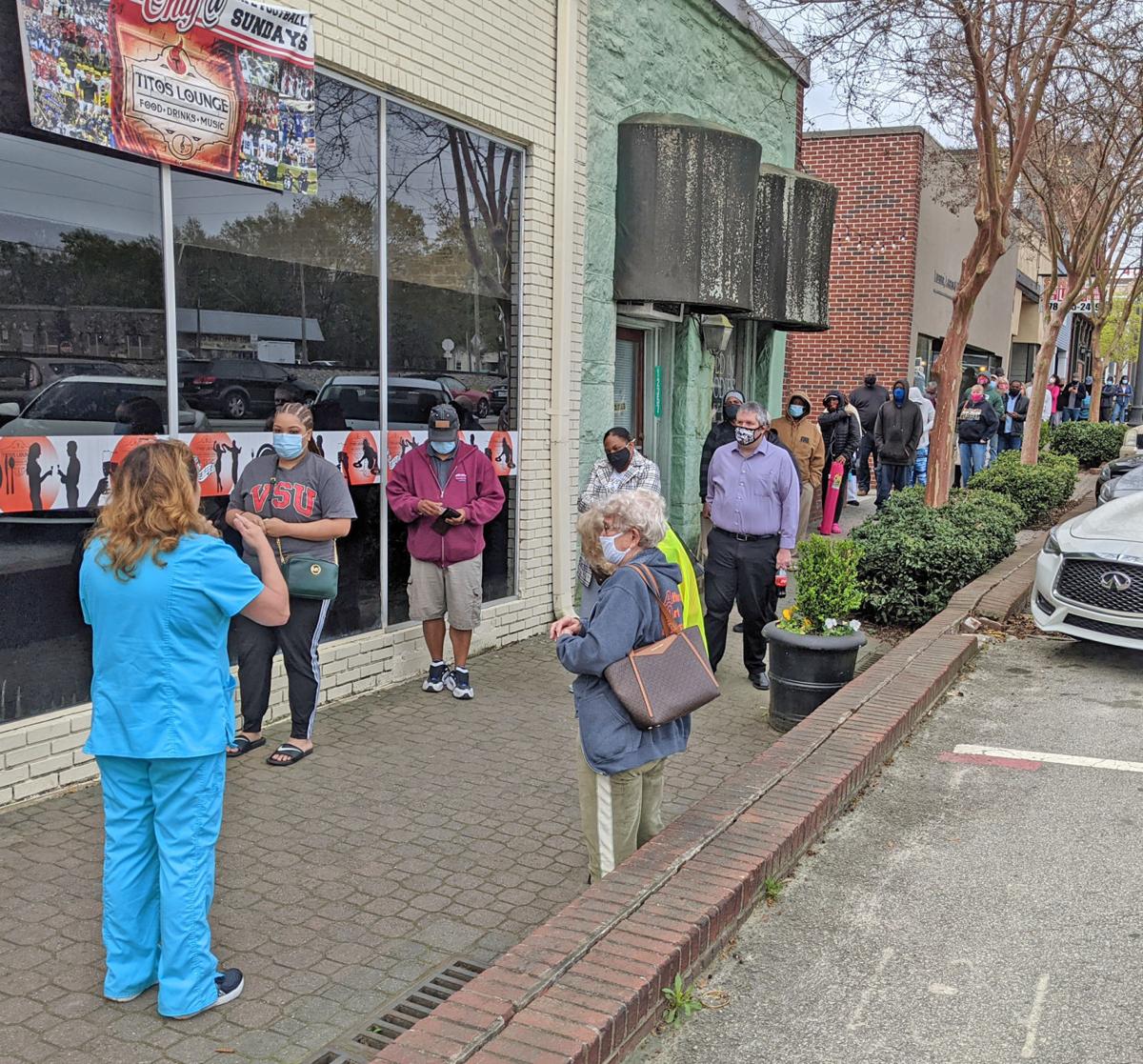 A health care worker talks to people lined up outside Tito’s Lounge on Veteran’s Memorial Highway to get a COVID-19 vaccination. 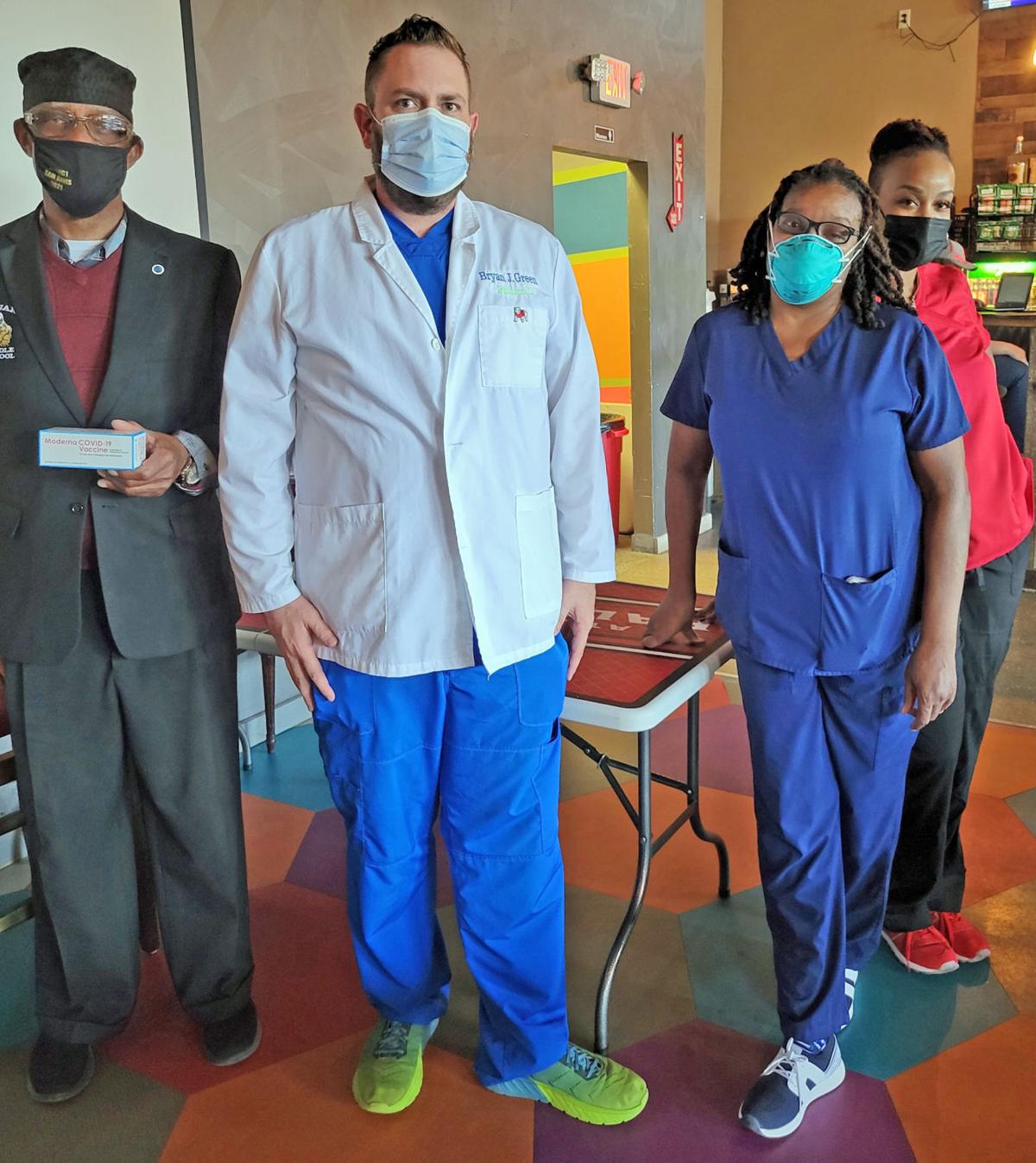 Douglasville City Councilman Sam Davis, Premier Drugstore owner Bryan Green and Tito’s Lounge have been teaming up for several weeks to bring walk-up COVID-19 vaccination events to downtown Douglasville. Davis said he anticipates the events will continue for as long as it takes to get everyone vaccinated.

A health care worker talks to people lined up outside Tito’s Lounge on Veteran’s Memorial Highway to get a COVID-19 vaccination.

Douglasville City Councilman Sam Davis, Premier Drugstore owner Bryan Green and Tito’s Lounge have been teaming up for several weeks to bring walk-up COVID-19 vaccination events to downtown Douglasville. Davis said he anticipates the events will continue for as long as it takes to get everyone vaccinated.

Premier Drugstore has been doing walk-up vaccine events at Tito’s Lounge in downtown Douglasville each week on Tuesday and Wednesday to give COVID-19 vaccines to the community.

Douglasville City Councilman Sam Davis, together with Premier owner/pharmacist Bryan Green and Tito’s owner Daniel Arrington have teamed up to take on the daunting task to acquire vaccines and get them into the arms of people in Douglasville. Premier promotes the two-day vaccine events and posts updates on Facebook.

Tito’s Lounge, located at 12353 Veteran’s Memorial Hwy. in downtown Douglasville, just opened last October, according to Arrington, who was contacted by phone.

Arrington said he met with Davis and Green, who were searching for a suitable space in which to deliver the walk-up vaccines events, and he green-lighted the use of Tito’s’ space.

Green was also contacted by phone for comment about the effort. Walk-up vaccinations have served well to supplement the appointments that continue to be done in the pharmacy, Green said. As of last week week the number of vaccines Premier had administered locally was over 3,000.

“I’ve been working with Davis since January. He was helping to get appointments set-up at our store and we started getting too many to handle. Sam reached out to some businesses, and we’ve been going to Tito’s for about five weeks now,” Green said.

Green said how much vaccine Premier receives week to week from the state tends to fluctuate, and they don’t know until Sunday or Monday how much they’ll be getting, but they’ve also been able to pick up some additional leftover doses from other sources.

Green said they routinely request 1,000 doses from the state and usually receive much less than that. Additional doses have come through hospitals or, in some cases, doctors who ordered the vaccines when they began to become available, but had since opted out of the program for one reason or another.

“That’s how we’re getting more than most other pharmacies, actively reaching out to the state, trying to go pick them up from other places,” he said.

Green is administering the two-dose Moderna vaccine. Second doses, which follow about a month later, can be done by appointment or back at Tito’s, he said.

For the second dose group, Premier is posting updates on its Facebook page letting people know when to come back, he said.

“We just have everybody go back to Tito’s when they’re due; they have like a two-week window; they don’t have to go on an exact date,” Green said.

Davis is a big supporter of this effort and promotes it on his Facebook page. Davis, contacted by phone, provided some back-up info.

“Well, I just went to Premier and [Green] said they needed a bigger location and we asked a new lounge downtown and they said OK.”

The two-day events at Tito’s are strictly walk-up and that was the idea, Davis explained, and added that a Douglas County address is not necessary to get a shot.

In some cases seniors or others with limited access to going online were struggling to obtain appointments, which was compounded by the limited supplies at any one location. Walk-up events have helped open up access to the vaccine, Davis said.

“You just walk in, show an ID, get a shot and go; I didn’t want people in the community to continue to go online and couldn’t get an appointment. It’s been working well, the Health Department loves it and it’s been a win-win situation,” said Davis.

The events are done on Tuesday and Wednesday, beginning around 9:30 a.m. and continue as long as supplies last. The event initially delivered about 100 shots a week and that number is now averaging to about 300 over the two days, Davis said.

Davis said that will continue probably on into the summer, or as long as it takes.

And, according to Green, outside of Douglasville, they’ve been doing more events, including about 100 vaccines done a little over a week ago at a church in Fairburn.

“Those churches talk to other churches and we’re getting a lot of requests to come and do clinics on the weekends,” he said.

And that work continues as, late last week, less than 20% of the state’s population had been vaccinated and the goal is up around 70%, Green said.

Late last week, Federal health officials gave the green light for fully vaccinated people to resume travel as an estimated 100 million Americans have had at least one dose of coronavirus vaccine, and evidence mounts of the shots’ effectiveness.