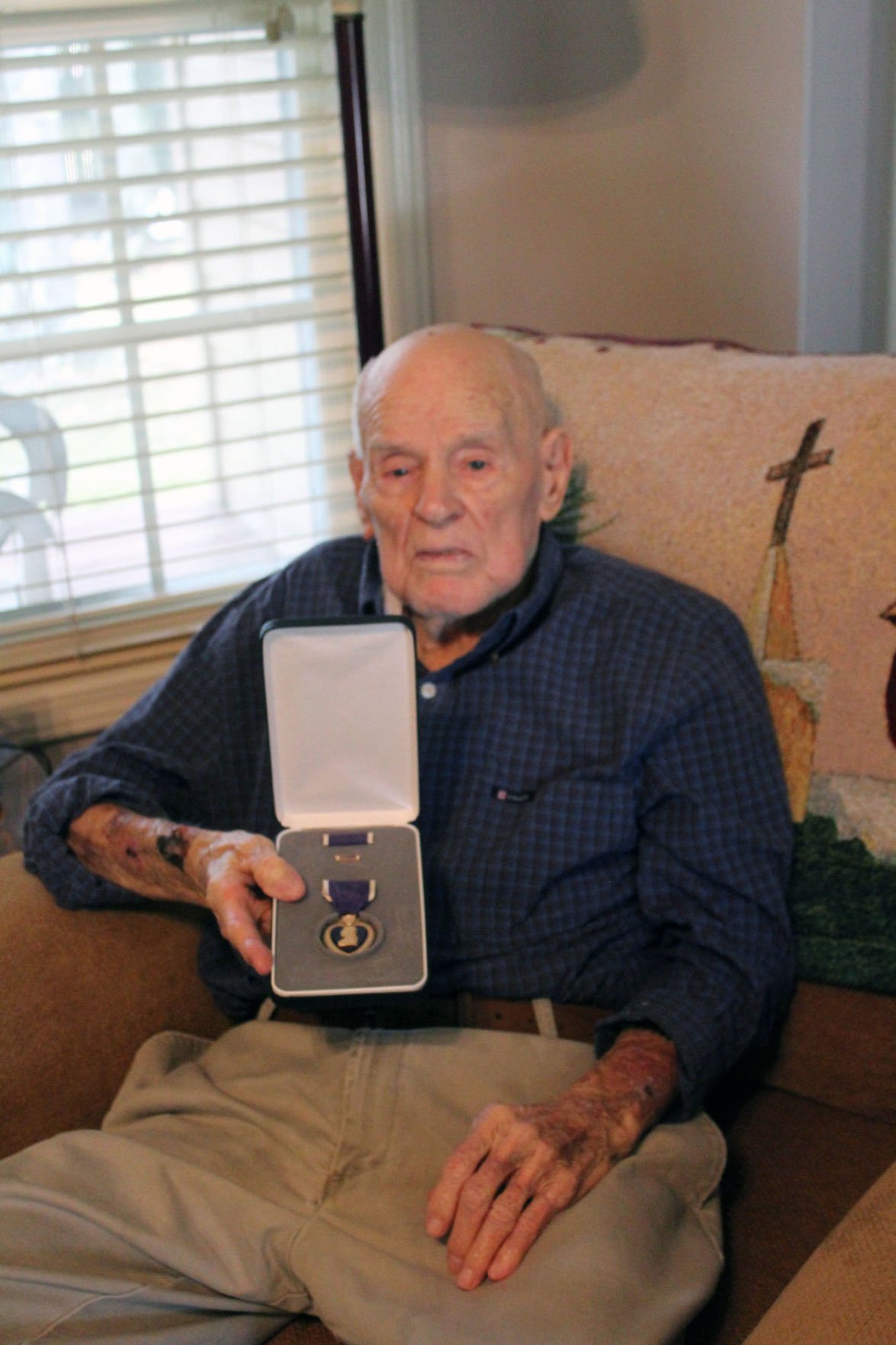 Forrest Ellis received the Purple Heart medal after being injured during World War II. Ellis, a 99-year-old Douglasville resident, served in the U.S. Army and was part of the 1944 D-Day invasion of Normandy. 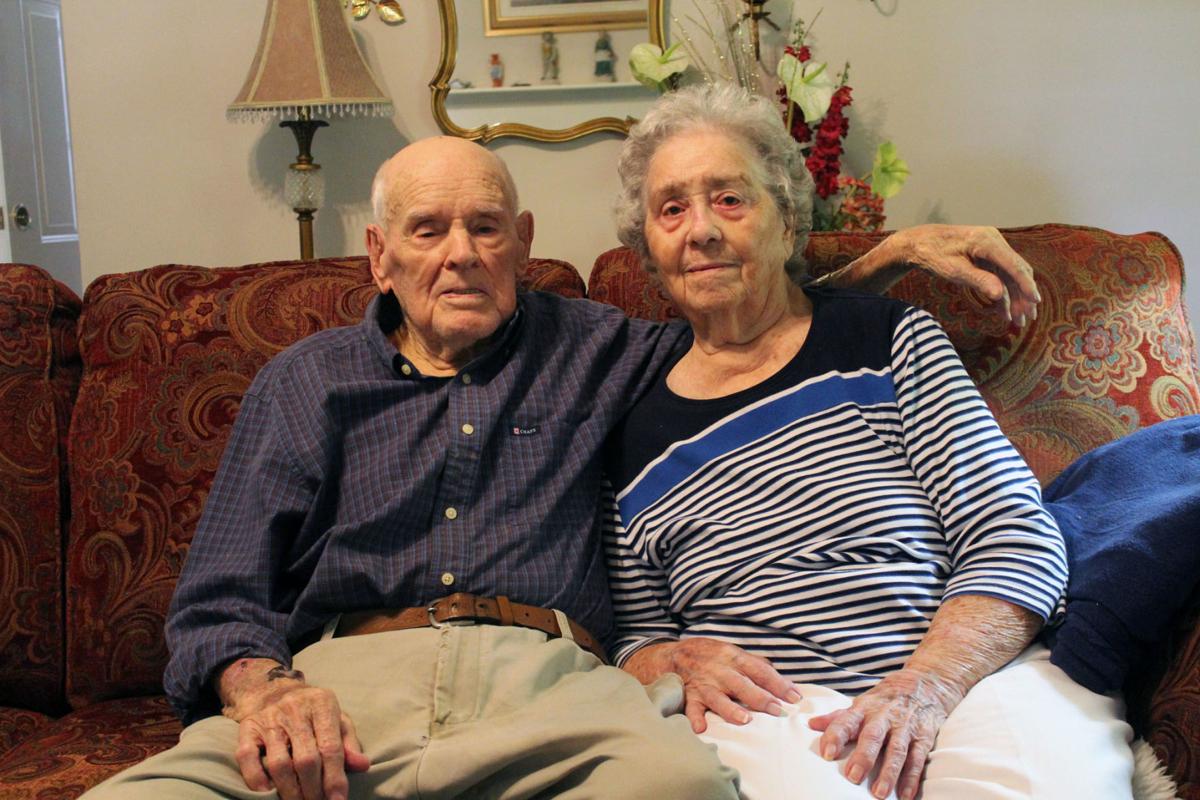 Forrest and Geneva Ellis married in May 1942, and seven months later he was drafted by the Army and fought in World War II.

Forrest Ellis received the Purple Heart medal after being injured during World War II. Ellis, a 99-year-old Douglasville resident, served in the U.S. Army and was part of the 1944 D-Day invasion of Normandy.

Forrest and Geneva Ellis married in May 1942, and seven months later he was drafted by the Army and fought in World War II.

Before Forrest Ellis began to talk about his experience in the U.S. Army during the 1944 D-Day invasion of Normandy in World War II, he apologized for not remembering all of the details.

Ellis, 99, sat in the chair in his living room earlier this week, and recalled just about everything that happened, from being drafted in December 1942 until he was discharged three years, two months and 28 days following an injury.

Despite his humbleness, Ellis’ memory seems as vivid as if it happened yesterday instead of 77 years ago this Sunday.

He remembered the event that led to him receiving the distinguished Purple Heart medal after being wounded in combat in France.

“Those Germans were rough,” Ellis said.

He was in France a total of 24 days before being shot in his left arm. It required an extended stay in the hospital as doctors saved his arm.

“It almost rotted off,” he recalls. “We were trying to run those Germans out of those holes.”

He once spent four days in a trench while “hunting snipers” as part of the Second Division of the 9th Infantry.

Ellis was part of the sixth wave of soldiers during the infamous D-Day Invasion that landed on Omaha Beach in German-occupied France in the Normandy landings on June 6, 1944.

Historians recognize the massive invasion of Allied forces as the beginning of the end of the war, as Hitler’s Germany was defeated.

Ellis doesn’t consider himself a hero although he was awarded seven medals for his service.

The Douglasville resident doesn’t participate in any ceremonies commemorating one of the country’s biggest war victories in history.

He still remains humble about his military service and the significance of the D-Day invasion.

“I just knew I was going to get drafted, and I was ready to serve,” he said in his soft voice.

In anticipation of being drafted the then-20-year-old farmer from Paulding County married his sweetheart, Geneva, who was 17 at the time.

The couple married May 16, 1942, and seven months later Ellis was on a bus and then plane headed to war.

“I wanted to go ahead and marry this good-looking woman,” Ellis said.

Ellis called it the “best $3 I’ve ever spent” in my life.

He paid a justice of the peace $3 to perform the ceremony in Douglas County.

“And that was borrowed money,” he grinned.

“No kids, that’s how we stayed married this long,” Ellis said. “We don’t have any kids to argue over. It’s been a good marriage.”

He said he considered himself a shy person while growing up, but there was something about Geneva that pulled him out of that shyness.

He walked her to her parents’ front door, and then “grabbed her by the hand and kissed her” before she went into the house.

“I haven’t been the same since,” Ellis said.

Geneva, 96, was also a part of the United States war effort as she worked for Bell Bomber, now Lockheed Martin. She was one of the workers known as Rosie the Riveter.

They were the females that worked in factories and shipyards during World War II, helping produce war supplies.

The couple still has the “love letters” they wrote each other while Forrest was in the Army.

She took off two weeks to stay with him once he returned home following his injury.

“That was the best news I heard when my sergeant said I was going home,” he said.

“He was blessed to get back alive,” Geneva said.

In 1955 while moving to a new house, Forrest’s eight medals burned when the moving truck caught on fire. The couple was able to save the box of letters, but Ellis’ connection to the war was gone.

In 2020, a neighbor, Bill Grizzard, heard the story about Ellis serving in the war and the lost medals.

Grizzard wrote Congressman David Scott in hopes of getting the medals replaced. Scott put Grizzard in contact with his military contact and within weeks the Army re-issued the medals.

“He is such a humble person,” said Grizzard, who is an Air Force veteran. “We are fortunate to have some good neighbors.”