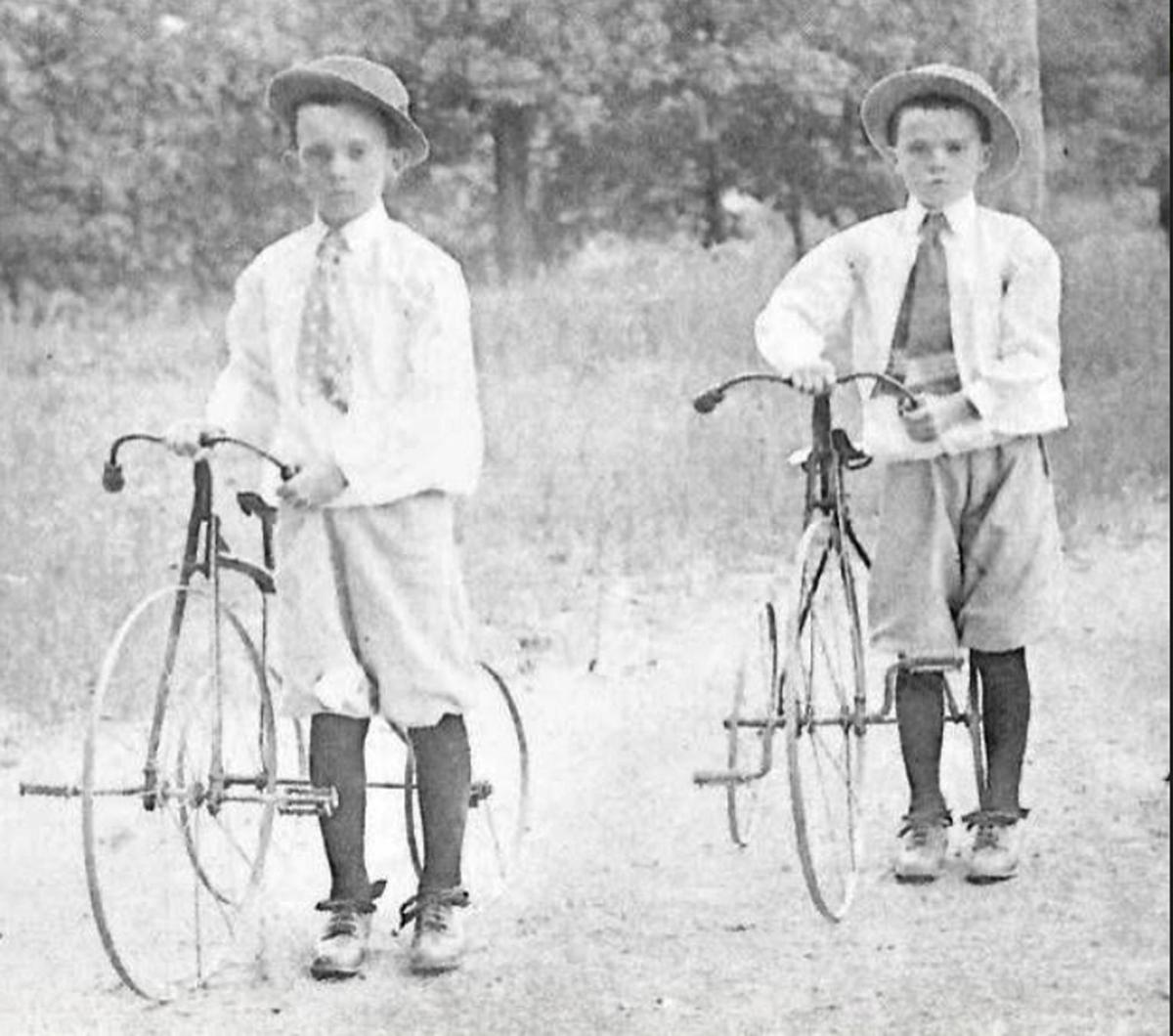 This photo is dated 1910 and shows Harold Ledbetter on the left and his brother Douglas on the right. Both young men were taken out of school and worked in the mill here in Douglasville. They had to stand on boxes to reach the looms in the spinning room. Their work day was from 6 a.m. to 6 p.m. 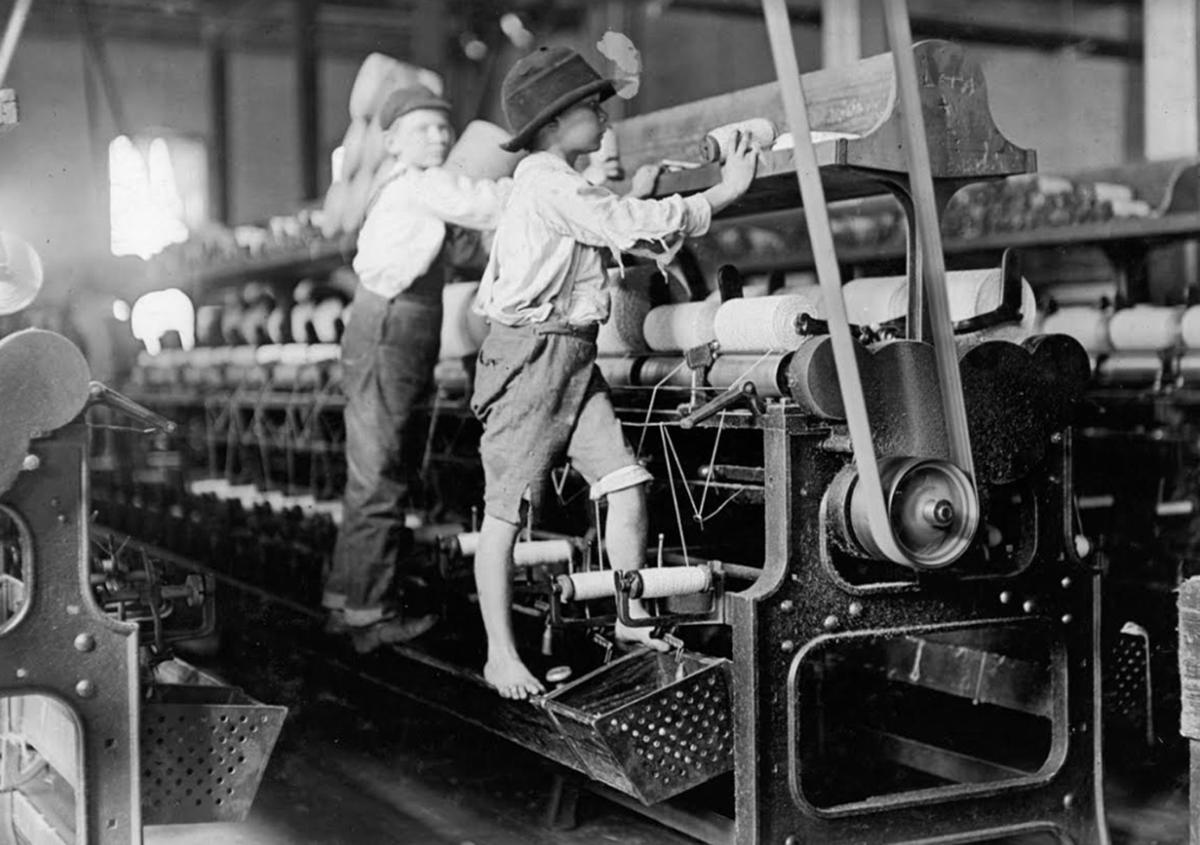 This image, one of the many taken by Lewis Hine, is dated 1909 and was taken at Bibb Mill No. 1 in Macon, Georgia. Notice the boys are barefoot and are so small they had to climb up on the spinning frame to mend broken threads and put back the empty bobbins.

This photo is dated 1910 and shows Harold Ledbetter on the left and his brother Douglas on the right. Both young men were taken out of school and worked in the mill here in Douglasville. They had to stand on boxes to reach the looms in the spinning room. Their work day was from 6 a.m. to 6 p.m.

This image, one of the many taken by Lewis Hine, is dated 1909 and was taken at Bibb Mill No. 1 in Macon, Georgia. Notice the boys are barefoot and are so small they had to climb up on the spinning frame to mend broken threads and put back the empty bobbins.

It was a beautiful Sunday morning on April 20, 1913. The sun was shining, the birds were singing, and folks in Douglas County were heading off to worship at their favorite church.

In Douglasville, as the bells began ringing to signal the start of 11 a.m. services, the whistle of the No. 40 train could be heard faintly as it approached town from the west.

One couple on the train was sitting close together and holding hands. They were whispering and rejoicing over the get-a-way from parents left behind. Since leaving the depot at Tallapoosa they had merrily chatted over their future and happiness, but first they would step off the train at Douglasville, find a pastor to marry them, and then enter wedded bliss.

Yes, Lee York and Jennie Stewart were determined to get hitched.

Jennie was one of seven children belonging to Henry G. Stewart who lived on Lipham Street in Tallapoosa. By the time she boarded the train to elope; seventeen-year-old Jennie had been working at the cotton mill in Tallapoosa as a spooler for at least three years based on the 1910 census. More than likely she started working there even earlier.

It was quite common for children to work in Georgia’s mills including our own cotton mill here in Douglasville. Following the Civil War and as the New South philosophy was embraced, thousands of poor farmers left their fields behind and headed for the mills that were springing up in various towns across the region including Tallapoosa, Villa Rica, and Douglasville. Entire families would be hired from mom and dad to children as young as five and six since there were no laws at that time regulating child workers.

Cotton mills were not the only industry where child workers could be found. Children toiled in coal mines, sweat-shop lofts, canneries, cotton and tobacco fields, and glass factories.

Mill owners argued that child workers were invaluable because their small size meant they could crawl around under and into machinery when it broke down, and they were helping families by employing more people.

There were dangers. Children were involved in accidents three times more than adults leaving them maimed or scarred for life. Brown lung was prevalent because of breathing in the lint from hours operating machinery.

Thankfully, there were those who objected to child labor. In 1904, the National Child Labor Commission formed and began to publicize the horror of children in the labor force in order to persuade Congress to act.

Photographer Lewis Hine, an ex-teacher, worked with the commission to provide photographic evidence between 1904 and 1910. His body of work during that time remains relevant today to document child labor history in Georgia and across the South. The commission’s work would lead to some legislation at the state level. Georgia would have some laws on the books regarding child labor by 1911, and once compulsory school attendance was passed in 1916 young children working in the Georgia mills was rare. Federal legislation would finally be passed in 1916 in the form of the Keating-Owen Act. Unfortunately, the bill was struck down by the Supreme Court, and it would be the Depression era before child labor would be regulated nationwide.

Getting back to our young lovers on the No. 40 train, Jennie’s dad figured things out about the time the No. 40 train left Tallapoosa. Mr. Stewart sent a message to Marshal L.O. McKelvey to stop the couple and return his seventeen-year-old daughter home to Tallapoosa. Marshal McKelvey did just that. In fact, he accompanied the young lady to Tallapoosa to make sure she got home without any detours.

This was the third attempt by the couple to “slip off”, and their plans had been thwarted each time by Mr. Stewart. Newspaper reports cheered on the couple though stating that if you once don’t succeed try, try again.

There is another saying, however, that is equally as familiar regarding three strikes and being out, right? In the case of Jennie Stewart and Lee York it appears the hope to get married reached the end of the line at Douglasville. Their combined record trail ended here abruptly, and I have been unable to determine if they were ever married.

This column ran in the Douglas County Sentinel in July of 2016. Lisa’s books “Every Now and Then: The Amazing Stories of Douglas County, Volume 1,” “Douglasville,” a pictorial history, and “Georgia on My Mind: True Tales from Around the State”, are available at Amazon and The Farmers Table, Douglasville Welcome Center, and the Douglas County Museum of History and Art.