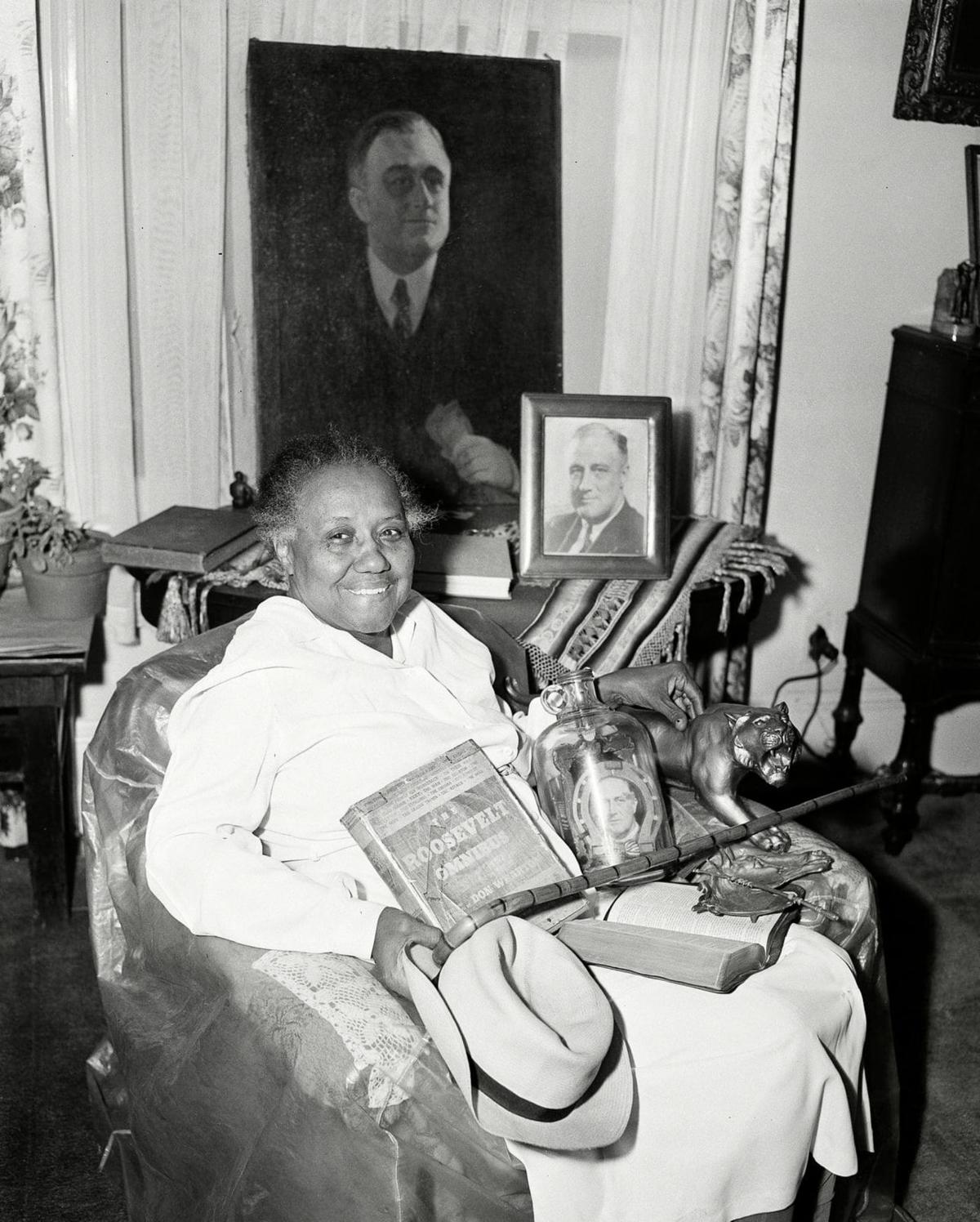 Elizabeth “Lizzie” McDuffie in retirement at her home in Atlanta surrounded by various items given to her by President Roosevelt including one of his hats. 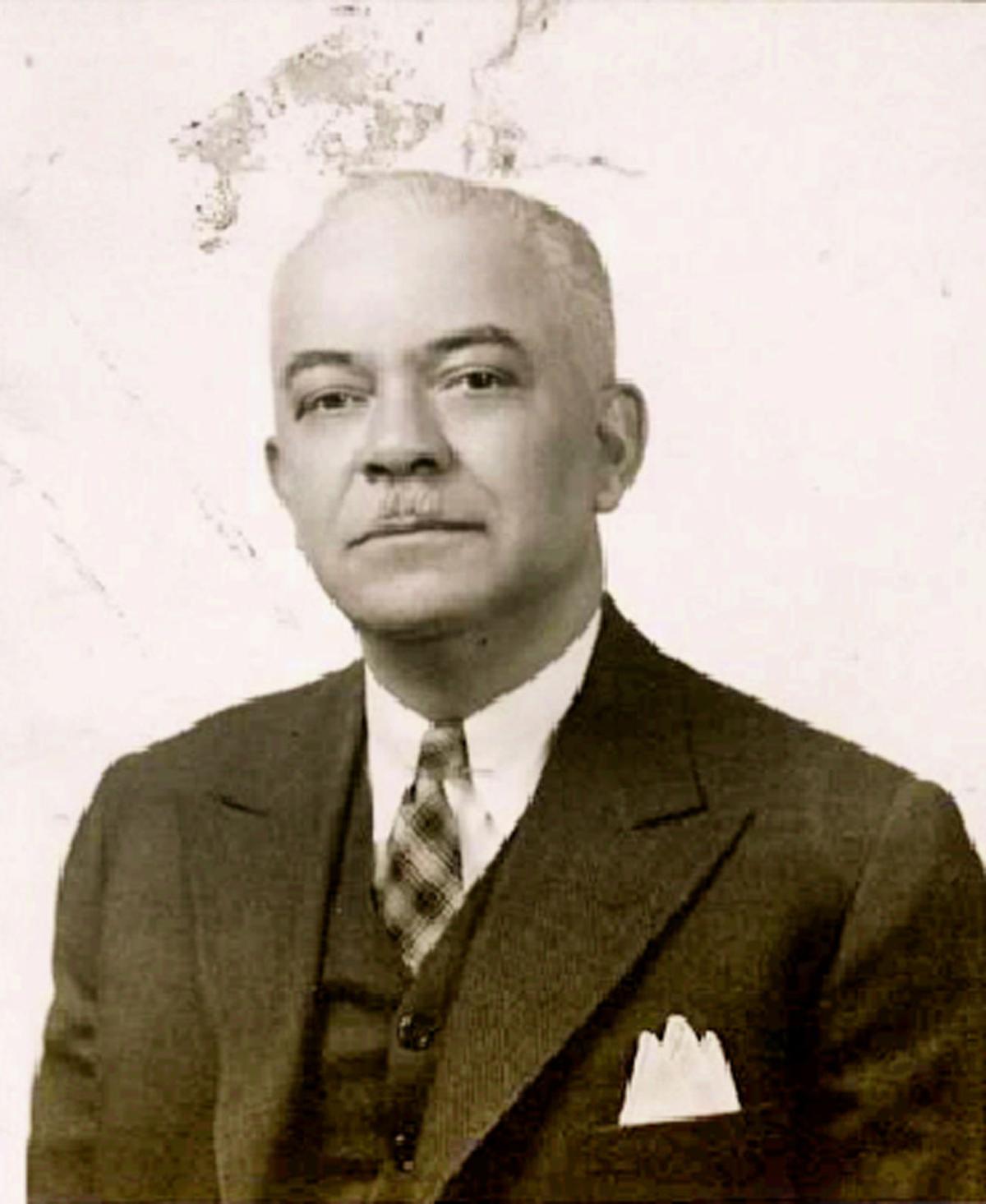 Above: Irvin H. “Mac” McDuffie began serving as Franklin Delano Roosevelt’s valet before he was elected governor of New York and for several years in the White House. Left: Elizabeth “Lizzie” McDuffie in retirement at her home in Atlanta surrounded by various items given to her by President Roosevelt including one of his hats.

Elizabeth “Lizzie” McDuffie in retirement at her home in Atlanta surrounded by various items given to her by President Roosevelt including one of his hats.

Above: Irvin H. “Mac” McDuffie began serving as Franklin Delano Roosevelt’s valet before he was elected governor of New York and for several years in the White House. Left: Elizabeth “Lizzie” McDuffie in retirement at her home in Atlanta surrounded by various items given to her by President Roosevelt including one of his hats.

The saying goes behind every great man there’s a great woman, but I would have to say there might be several woman including mothers, wives, daughters, and in the case of President Franklin Delano Roosevelt a maid named Elizabeth “Lizzie” McDuffie who was born in Covington, Georgia in 1881 to a sharecropper and his wife. Lizzie later moved to Atlanta and attended Morris Brown College. In a 1937 interview Lizzie advised she also “took a course in English, diction, elocution and various dialects.” This was to her advantage as Lizzie was known for her poetry recitations.

Though she held a college degree, professional opportunities were not available to Lizzie in the early 1900s. After being turned down for a few jobs, she took a position with Edward H. Inman (1881-1931), a member of a very wealthy and prominent Atlanta family around 1910. Along with his wife Emily, Inman built the iconic Atlanta mansion known as the Swan House and is now part of the campus at the Atlanta History Center in Buckhead. Lizzie remained with the Inman family for 23 years as a beloved member of their household staff.

In 1912 Lizzie married Irvin H. “Mac” McDuffie, a barber from Elberton, Georgia who had worked his way up from shoeshine boy to part owner of the McDuffie-Herndon barbershop on Marietta Street financed by Alonzo Herndon of the Atlanta Life Insurance Company. At some point Mac was terribly injured when his leg was scalded and could no longer stand for long periods of time. He managed to get a position as a valet for the German consul in Atlanta — Dr. Erich Zoepffel-Quellenstein, but by 1914 he needed a new position when World War I began.

As early as 1924, Franklin Delano Roosevelt had been traveling to Warm Springs to treat his paralytic illness. One of the suppliers for building materials for the Warm Springs Foundation happened to be Mac’s customer at the barbershop and passed his name as a possible valet to Mr. Roosevelt who interviewed Mac at Warm Springs.

Though his new position with Roosevelt would take him away from Lizzie for long periods, Mac accepted the job. Before Mr. Roosevelt was elected governor of New York, Mac was his only companion on trips through the Midwest. He accompanied Roosevelt all over New York state on his two strenuous campaigns for the governorship, made three trips through the state barge canal to Canada, and crossed the Atlantic with Roosevelt several times. Mac would see Roosevelt first thing each morning and last at night. He helped Roosevelt in and out of his wheelchair and tub, and most importantly helped him attach the heavy steel braces for his paralyzed legs. Still with all his difficulties Mac said of his boss, “He can work five men to death while he lies in bed.”

Mac had been Roosevelt’s valet for several years when it was announced Lizzie would join the White House staff in December 1932. The special bond the President-elect had with Mac continued with Lizzie. The couple had free access to the President’s bedroom and often discussed the state of the nation with him. Lizzie would often tease the President and kiss him on the top of his head. President Roosevelt loved the attention and often called her “Doll.”

Found within Lizzie’s unpublished memoirs she noted she was the “SASOCPA,” an acronym which stood for “Self-Appointed Secretary on Colored People’s Affairs.” In this role Lizzie was an important yet little known early voice in Civil Rights — an unofficial liaison between her race and President Roosevelt. She and Mac together often carried stories of discrimination in the postal service and Works Progress Administration to the President. She helped form a worker’s union for government employees, helped modify some New Deal policies, was helpful in persuading the President to pardon three African American soldiers accused of rioting, and had something to do with Executive Order 8802 which prevented racial/ethnic discrimination in the federal government and the nation’s defense industry.

Mac accompanied President Roosevelt to Brazil in 1936 and during this time Lizzie made campaign appearances on behalf of the President and again in 1940 primarily to African American audiences. She often gave “statistical reasons” to re-elect Roosevelt and “intimate details of life in the White House.” Lizzie and Mac were such trusted staff members that they went to the Roosevelt family home — Springwood at Hyde Park in New York — to prepare for King George VI and Queen Elizabeth’s visit in 1939.

In 1936 when “Gone with the Wind” was released, Lizzie obtained a copy of the book from a Secret Service agent. In a 1937 interview while Lizzie was visiting Atlanta she admitted being “fascinated” by the book saying “It is glamourous in parts and is typically southern and true to life. I’ve heard my mother and grandmother tell of the stirring times … Margaret Mitchell has done a fine piece of work. I am going to see her before I go back to Washington, D. C.” She verified rumors she had auditioned in New York for the role of Mammy in the film version of “Gone with the Wind” that would be released in 1939. First Lady, Eleanor Roosevelt, provided a letter of recommendation for Lizzie and casting began as early as 1937.

Eventually, however, Lizzie lost the role to actress Hattie McDaniel.

Mac left his position as valet in 1939 after suffering from what has been described as a “nervous breakdown.” While Lizzie stayed on at the White House, President Roosevelt made sure Mac had an easier job at the Treasury Department as a messenger.

Lizzie was present when President Roosevelt died April 12, 1945 at Warm Springs. On the train taking the president’s body back to Washington, she reflected on her life’s journey saying, “I lay in my berth with the curtains pulled back from the window and watched the lights and shadows of the passing countryside. In the midnight quiet, I looked out at the sharecroppers’ cabins nested like old grey hens in the cotton fields. It was in a cabin like that I had been born.”

Following the President’s death, Mac and Lizzie returned to Atlanta where they lived on Randolph Street. Sadly, Mac died on January 30, 1946, on what would have been President Roosevelt’s 64th birthday. Lizzie remained in the Randolph Street home surrounded by many mementoes of her time with the Roosevelt family. In 1952 she wrote an article for “Ebony” magazine titled “FDR Was My Boss” and mentioned many of the people she met during her time at the White House. She also worked on her memoir before passing on November 27, 1966. Lizzie rests alongside Mac at South View Cemetery in Atlanta. The couple’s papers including Lizzie’s unpublished memoir, “The Back Door of the White House,” can be found at the Atlanta History Center.